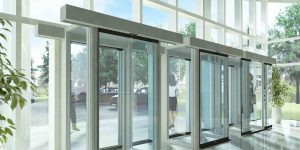 The concept of protecting open doorways with an air curtain has gained traction over the last half of the 20th century and into the 21st, especially as the world became more energy conscious. Air curtains (or sometimes called air doors) consisted mainly of a rectangular metal box, motorized fan and air nozzle for distributing an airstream down across a doorway opening to separate the indoor and outdoor environments.

The air curtain’s fundamental operation remains the same today, but manufacturers have added more innovations in the last 10 years than the previous 60 years combined. Changes include aesthetics, IoT operation, simplified installation, air curtains for revolving doors, and a host of other modernizations that have revolutionized the category. Features that were inconceivable at the turn of the century are now possible, such as monitoring/controlling with a smart phone, automation through BACnet building management systems, and powering fans with EC motors, just to name a few.

Those features and innovations, from aesthetics to performance, make it easier for contractors and engineers to present air curtains to building owners as a positive solution for increased air comfort and energy savings.

Bringing comfort to the workplace

Work culture changes, especially the trend toward increased employee comfort and health, have recently given air curtains a new purpose. A comfortable work environment has become top of mind for employees and potential employees. The air curtain’s role in that might include the prevention of insect infiltration, or the provision of keeping idling vehicle emissions outdoors.

Stepping into the digital age

The most recent technological advancement is controlling and monitoring air curtains through app platforms, the Internet, Internet of Things (IoT) connectivity, BACnet interoperability, and proactive air stream automation based on current weather sequences and doorway temperature. 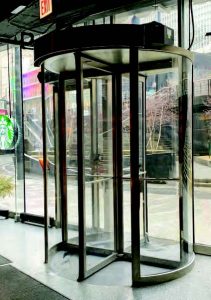 Another beneficial air curtain innovation is an application for revolving doors, which are common in hospitals, hotels, office buildings and other commercial buildings with heavily trafficked entrances. While revolving doors are designed to significantly reduce a building’s energy consumption, they are often misconceived as airtight. The revolving door acts as an air lock, however it still allows traces of outside air and fumes to enter the lobby with the people. Furthermore, if there are wheelchair-accessible collapsible panels in the revolving doors outdoor air and contaminant infiltration is exacerbated. Revolving door air curtains match the contours and metal finish of the revolving door design, a radial plenum with air nozzles is fabricated, while the fan and blower hardware are hidden from view to maintain the aesthetics of the entrance.

Air curtains can be specified to also provide space heating at the door with steam, hot water or electric heat. Previously, the conventional placement of the electric heating element in the air discharge caused a disruption of the airstream’s velocity, volume and uniformity balance. Today a Venturi-style heater design offers a more aerodynamic electric heater with improved air performance efficiency. Air is drawn through the heating element via the blower inlet before entering the discharge airstream. Thus, the heated discharge airstream velocity remains unobstructed and nearly 100 per cent of the emitted thermal energy is transferred. The unimpeded air flow also results in a full laminar pattern designed to create a near perfect, environment-separating air seal across any open doorway.

For decades the air curtain resembled a metal box when mounted above doorways. Now, manufacturers are offering more high design models that complement the architectural appearance of buildings and doorways. Architectural trends have helped create a demand for aesthetics, such as triangular designs or refinements such as rounded corners and powder-coated finishes. Few patrons will notice these air curtains upon entering through the establishment’s doorway, because they angle upward out of peripheral view. Anodized aluminum and other high-fashion finishes match most aluminum doorways and accompanying window glazing and help the air curtain blend into the interior environment. 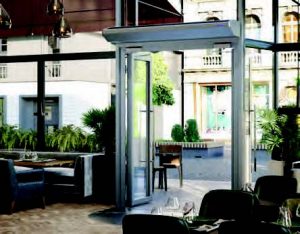 Previously, the industry only offered shorter lengths requiring them to be bolted together to cover doorway widths greater than six feet. Now single lengths come in a maximum of 12 ft. long for commercial air curtains with custom longer single lengths available. The longer lengths are advantageous because these single lengths don’t create airstream disrupting obstructions. They also reduce labour and mounting hardware costs.

Innovations are an important step forward for the industry, but only if the fundamentals of returning 70 to 80 per cent of the indoor energy back into the space are maintained. Air curtains should be properly sized and certified under criteria in accordance with Standard 220 established by the Air Movement & Control Association – International.

The volume, velocity and uniformity of the air stream are critical performance factors in air curtain effectiveness. Air velocity is critical to air curtain application success and should typically be a minimum of 400-feet-perminute when the air reaches six inches above the floor for environmental separation. Building and energy codes, such as ASHRAE 90.1, that allow for air curtains to be used as a substitute for vestibules require AMCA certification to satisfy the code.

BC contractors now need to include licence number in advertising