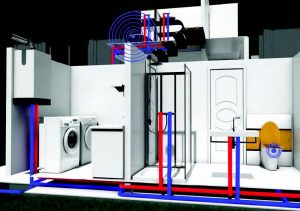 There is an old trades’ saying that you became a plumber and not an electrician because there was too much math in electrical. Little did some of us realize that in order to become a plumber/gasfitter there would still be some electrical involved with the gas part of the trade. It is funny though, that most electricians I’ve talked to, prefer electrical over plumbing because they are afraid of leaks. I still would prefer a leak over electrocuting myself, or blowing myself up.

Such is the dilemma of a plumber – we hate having leaks. They are like call backs, you never want one, but they still happen. There are many reasons for leaks, including corrosion, water hammer and old age. Piping systems do age and eventually fall apart or leak. The worst leak is the unexpected one.

It is sometimes not too bad if your old hot water tank leaks as it is usually installed near a floor drain to prevent severe flood damage, and there are usually warning signs. In other words, if you’re running out of hot water or there are signs of soot marks due to overheating near the bottom of the tank, it usually means it’s time for replacement.  While the tank isn’t cheap to replace, it’s not as bad as a blown apart pipe in the wall, thereby causing a lot of interior structure damage. Even if insurance does cover it, it is still a pain in the neck. Hence that means every time homeowners go on holidays for more than three days or so, it’s common practice to have a friend or neighbour check on the residence to ensure all is well, that is if the owners want insurance coverage. I don’t know how many times I’ve gone to insurance claims where the wooden floors were warped beyond recognition, and drywall damage right to the basement was significant. The furnace can have significant water damage, the electrical and possibly the heat exchanger need to be changed if moisture affects them. This is all possible damage from obvious leaks in a home.

Today we are going to talk about the leaks that are not so obvious, how to find them, and how to prevent them from becoming costly. Water leaks can vary in expense from a toilet flapper or faucet leaking, to the water main or underground pipe leaking. The hardest, and possibly the most-costly, leak to locate and repair is that invisible one underground. I’ve been involved with several hundred of these kinds over the years. The following are some lessons I’ve learned. 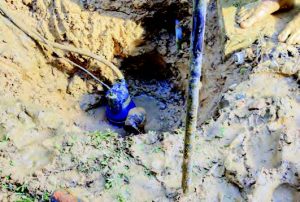 When water perforates the outside ground, that is not necessarily where the leak is. I have had leak locators promise me exactly here the leak is and they were usually wrong. The leak locator who explains that his locate is approximate is usually the one to trust. Underground water paths are sometimes inexplicable, it’s just a matter of its easiest path which could be several feet away from the above ground water surge.

If you come across an underground water leak in the winter, you can rest assured the water source will be tricky to find. Especially in Canada where the frost can be as deep as five- to six-ft. in some conditions. Big asphalt or concrete lanes allow for deeper frost conditions. When the frost is thick, it will act as a barrier to prevent the water leak from penetrating, hence it will go around it underground and appear as much as 20 to 30 ft. away. This can create a serious mistake in your repair calculations.

3) Underground leaks are not always covered by insurance

Most people think leaks are always covered by insurance and in general they are correct. If a pipe bursts in the structure, it is usually covered, however if the water leak occurs underground outside of the home or structure, there is a good chance it is not covered. Most insurance companies only cover leaks in or under the insured structure. The problem is most underground leaks occur in the laneway outside of the home. The reason being is when the city or indemnified company installs the water service tail piece on to a property, they make sure it is well on the homeowner’s property, sometimes as much as a nine ft. overlap. This means when the plumber connects the corporation coupling to the tailpiece, it is definitely on your side. Most underground leaks happen at the connection point underground which is typically under the private lane outside of the house.

4) Leak detection is not always accurate, but it is definitely much better than before

Back in the day leak detection was a bit of an art, even though we have used noise detection technology for many years. Sometimes city leak detectors could locate leaks just with an oversized stethoscope placed on the meter or curb cock and through sound experience could tell where the leak was by ear. Some locators were within a foot or two with their locates while others were many feet off, so it depended on who did the locate. Today, interior leak detection can be done with many different brands.

These different methods are usually used in conjunction with an app that can warn of leaks inside a house. These devices include digital, mechanical or ultrasonic detection. One of these devices actually sends a text notification and cell call if there is a leak and shuts off the water. This can be very helpful for insurance reasons, to limit damage to the home. Of course, now these different methods only detect leaks in your house, not outside or underground.

If a person tells you that your leak can be accurately estimated, he or she is probably inexperienced, unless of course they are estimating complete replacement or pulling a new water line. Due to not being able to see underground, almost anything can happen. Plastic services are very difficult to locate through sound as they do not conduct sound very well. Most if not all underground leak detection is accomplished through acoustic methods. Leak detectors will sometimes use air to over pressurize the leak and hope for detection.

6)Leak repair or replacement cost less than the resulting damage

It’s interesting to note, that repairing the leaking pipe is always the cheapest part of this process. It’s the resulting damages that cost the most, such as mould, dry wall, flooring, and even appliance damages. There could even be concrete structural damage, or exterior yard and lane damages. The plumbing bill is usually only five per cent of the actual costs, and luckily if insurance is covering it, they cover 95 per cent of the resulting damages. Encouraging customers to install a digital leak monitor in their homes could save them quite an expensive ordeal. 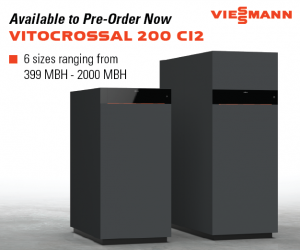 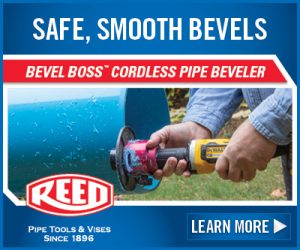