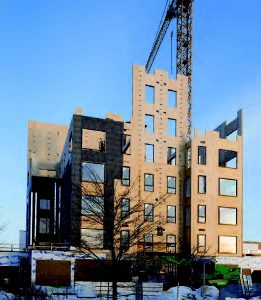 Buildings constructed of mass timber are becoming the “new kids on the block” for the residential and commercial sector. Mass timber architecture appeals to both builders and owners alike because of the ease of construction, large open spaces and high ceilings containing attractive wooden beams. Mass timbers are also more durable than typical wood products used in building construction according to experts in that field.

So, what is “mass timber” (or “heavy timber” as it’s called in the U.S.)? Significantly different from wood purchased at the local lumber store, mass timber is made from large pieces of wood either cut from a single log or made by laminating wood pieces together with glue or nails and screws. Types of mass timber include cross-laminated timber (CLT), glue-laminated timber (glulam) and nail-laminated timber (NLT). These timbers are then assembled during construction using custom joints and typically wooden pegs. 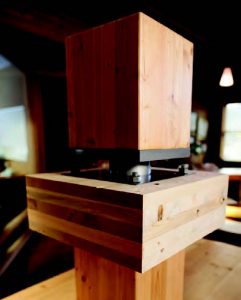 British Columbia has been a leader in mass timber construction since it was first introduced. With a ready supply of timber and the desire to support the forestry industry, BC changed its provincial building code in 2019 to permit mass timber structures up to 12 storeys. BC Premier John Horgan stated at the time, “BC will be the first province in Canada to allow the construction of tall wood buildings up to 12 storeys, which means that we are ahead of the National Building Code.” Of the large provinces that have their own building codes, Alberta, British Columbia and Quebec have adopted the 12 storey provisions from the 2020 NBCC. Ontario’s current mass timber building code provisions remain at the six-storey level.

Key regulatory concerns since the advent of mass timber construction are fire hazard and risk to public safety. Mass timber experts dispute these claims stating mass timber buildings are in fact fire resistant. One online source explains “When exposed to fire, the outer layer chars and acts as a protective coating, insulating the wood underneath. Additionally, the lightweight nature of mass timber, weighing approximately one fifth of equivalent concrete buildings, allows for smaller foundations and seismic resistance.”

According to Horgan, “We’re not waiting for the rest of the country to get here. We already know that the product we are building or creating here is fire-resistant. We know that we can build faster and we know that it is better for the environment.”

Like all construction processes, there are advantages and disadvantages for mass timber. The most obvious advantage according to the industry is the unique look of the building where the timbers are left uncovered creating “a rustic look and feel that many people find welcoming.”

Mass timber builders claim the construction process moves faster and fewer workers are needed on the jobsite. Construction involves large timbers that have been “cut to fit” specific parts of the structure and when brought to the jobsite, the timbers are simply joined together to construct the building.

Some of the other advantages listed by the industry include:

Mass timber structures are also touted as “environmentally friendly” primarily because the timbers are a reusable resource and have a reuse life that can last as much as 100 years. Another environmental attribute is the CO2 large timbers can sequester within the wood. There is also less wood waste from the jobsite because of the “Lego-like” production of the timbers. These factors as well as the sustainable use of local wood for the timbers results in “a lower carbon footprint and lower cost to the environment.” 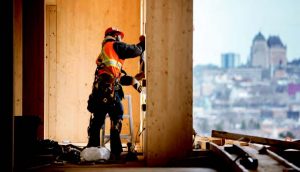 Mass timber construction also has its challenges. One significant issue is the limited space for the mechanical services in the structure. While exposed timbers are aesthetically attractive, the trades have difficulty finding places to “hide” parts such as ductwork, wiring and piping. (Note: This will be covered in more detail in Part II of mass timber construction in an upcoming issue). Also, the simplicity of the construction process has to be weighed against the production time needed to precision cut the timbers and the heavy equipment needed on the jobsite to assemble the large timbers.

There are also two sides to the fire safety aspect of mass timber. The response to the claims of the mass timber industry appears to be the difference between fire “resistant” and fire “resistive.” Fire resistant products do not meet the Fire Code definition of fire resistive in that they still catch fire and must be extinguished. This distinction in the fire codes affects insurance and risk issues for mass timber buildings. Being a combustible product, mass timber is under significant scrutiny by underwriters at present, which leads to higher costs for insurance during and after completion of construction. These costs should decrease as more mass timber structures are built and more experience is gained with this type of construction.

Effects from water exposure from severe weather conditions during and after construction such as warping, rot and mould are another risk. The industry is responding to this concern with solutions such as “tenting” of buildings during construction, a “glue topper” on exposed mass timber edges and decking, and moisture testing to determine the timber’s ability to dry out during construction.

Mass timber construction is relatively new in Canada. Realistically, this method is in its infancy and as industry experts suggest, many of the challenges facing mass timber need time and experience to determine solutions that will meet both building owner needs and insurance requirements. However, it is clear mass timber construction is here to stay and is growing in popularity as Canada considers the low carbon and GHG reduction targets the world needs in the future.