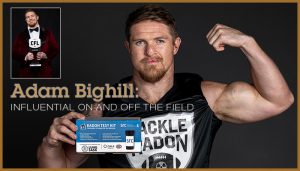 Outside of football circles the Canadian Football League (CFL) veteran is also known for his commitment to numerous charities such as the Children’s Hospital Foundation, Operation Smile, the Ride for Dad, Special Olympics, Making Faces, and the Tackle Radon campaign for which he is an ambassador.

Unlike his football career, which seemed to be in the cards since he started playing at seven years old, Bighill’s entry into the world of indoor air quality was more by chance.

When Tod Boss, who has had a working relationship with The Lung Association for years through a variety of programs including Tackle Radon, reached out to him, Bighill’s interest was piqued. “Tod Boss had the idea of educating the public about the dangers of radon. I had no idea about radon. He just randomly hit me up on Twitter and we had a conversation and piqued my interest. Tod gave me a tester to use in my house. Sure enough, my numbers came back high − higher than I would’ve liked.

“We made use of our HRV to the fullest to get as much ventilation as we could. That helped a considerable amount. It was still a bit high, but you know, it was a rental home and we weren’t really able to put in a mitigation system, but we were in the process of building a new home. In our new home, indoor air quality was paramount. We have a radon mitigation system.

“Tackle Radon caught my interest and awareness personally, for me and the health of my family. It gave me some tips and tricks to achieve a better number. That was the beginning of opening my eyes to informing others. People need to know how safe they are, and what to do to ensure radon levels are at least under Health Canada guidelines.”

Bighill, whose contract with the Winnipeg Blue Bombers was extended for the 2022 season, started his career with the CFL when he was picked up as a free agent by the BC Lions in 2011. Coming from the National Football League (NFL) style of play to the CFL suited Bighill, who finds the CFL style more exciting.

He is proficient at a number of sports but it is the physical nature of football that makes it Bighill’s favourite sport to compete at. “It’s definitely for tough people. That’s something that really drew me to it − the tough game builds a tough person.” It is the off-the-field side of football he sometimes finds hard. “My least favourite part of the game is losing guys to the business of the game, where you don’t get to play with certain teammates anymore; they’re no longer in your locker room.”

At 33 years old Bighill has been fortunate and has not had serious injuries, but professional football isn’t something you can do forever. He has another career path underway with a private wealth management company. “I have a great team I’m working with outside of my football world. My long-term goal is building my platform in the financial industry and wealth management. I’ve already got a great start there. At the end of the day, I want to play as long as I’m willing to compete. Right now I still want to compete and I still want to train to be the best. And my body’s holding up. At this point, who knows it could be another three years.”

Bighill’s 2021 season was one of his finest as he led the CFL’s stingiest defence with 70 tackles and added two quarterback sacks, two interceptions and two fumble recoveries – one for a touchdown. He was busy in the playoffs, too, registering eight tackles in the Western Final and another five in the 108th Grey Cup. Bighill signed a one-year contract extension to remain with the club on January 20, 2022. He remains one of the Blue Bombers’ most-influential players and leaders on the field and in the community. He and his family became Winnipeg residents after he signed a three-year contract extension in 2019. Bighill suited up for six seasons with the BC Lions (2011-2016), recording 509 defensive tackles, 70 special teams tackles, eight interceptions, eight forced fumbles and 33 sacks in 99 career CFL games (85 starts). He was a four-time CFL All- Star and five-time West All-Star with the Lions and was a member of their 2011 Grey Cup championship team. In 2015, Bighill led the CFL with 117 tackles and was named the league’s top defensive player. Bighill was twice named the Lions Most Outstanding Player (2013, 2015).

One of the most decorated defenders in league history, Bighill was named the league’s Most Outstanding Defensive Player for the third time in his career after winning in his first season with the Blue Bombers in 2018 and in 2015 as a member of the BC Lions.