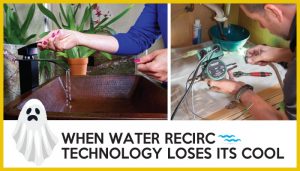 It’s a, well, creepy sort of problem. That is, when hot water recircs lose their ability to govern themselves. But, let’s back up just a bit. Let’s start with an explanation. Then we’ll talk to the experts.

There’s little debate that residential or light commercial domestic hot water recirculation (DHWR) technology has proven its value in the world of plumbing and mechanical systems. The devices guard our safety, comfort and health. Hot water recirc systems move potable hot water to fixtures quickly, without waiting for the water to get hot, so there’s less wasted water, and time.

The key challenge to these simple systems is the problem of “hot water creep.” Let’s take a closer look, beginning with an examination of the components that have a role in the recirculation of a home’s domestic hot water.

What’s in the mix?

Let’s first define the “system.” After all, the various components, if not connected intelligently and working in concert, would accomplish nothing:

“It takes some, or several of the components above, to make a DHWR system,” explained Rick Mayo, product and applications instructor, western region, Taco Comfort Systems. Most recirc systems, by design, have a tempering valve that continuously adjusts its temperature when water flows through it – while tempering (that is, mixing) it with cold water – to maintain proper outlet water temperature for rapid release at points of use.

The challenge is to maintain the mixed water temp during periods of no demand. The reason for this:  the recirc’s pump enables flow through the valve, even when there’s no demand, or draw, from points of use – such as faucets and other fixtures. For this reason, recirc pumps must be piped so that the recirc’s returning flow can reach both the cold connection of the valve as well as the cold connection of the heat source.

Typically, a water heater’s storage temperature is set for about 140°F for legionella mitigation, and the DHWR’s hot water temperature is reduced to about 120°F at the hot connection of the valve (with the reduced temp made possible by mixing with cold water, by design).

This can cause the valve assembly to gain temperature; that is, until it reaches the hot water’s set-temp. The internal thermostat adjusts the piston to open the cold port and close the hot port, allowing hot water to recirculate.

Unfortunately, there can be challenges to the intended function of these systems.

“It’s often a piping challenge,” said tekmar’s general manager, Greg Leupin. “For many hot water recirc ‘creep’ challenges, the challenge has to do with incorrect piping. When the recirc is off or at rest, thermal ‘ghost flow’ can affect the amount of hot water that makes its way into the [distribution] piping. Leupin added that many recirc loops lack a mixing valve, causing excessive – sometimes unsafe – temperature in the recirc loop, increasing the risk of scalding. This can also lead to inefficiency from heat loss, especially when the domestic water lines aren’t insulated.

Creepy situation #1:  If the hot water distribution system isn’t insulated, this can cause the distribution loop temperature to drop during periods of no demand.

Creepy situation #2:  Domestic water systems installed without a hot water recirculation pump or, for that matter, a malfunctioning DHWR or an improperly piped DHWR, will cause the distribution tempering valve to overheat during periods of no demand. This overheating of the valve assembly may go unnoticed for quite a while and can damage or cause early failure of the DHWR device, and components.
Mayo offers this insight:  The ASSE 1070 valve does a better job of restricting flow of the hot water than the ASSE 1017 − offering greater assurance of preventing “creep.”  He clarifies: “Don’t get me wrong. Those ASSE 1017 valves work as intended in non-recirc systems. If the temperature is set for 115°F, they regulate the temperature to that point, almost assuredly. But as soon as you match them up with a (DHW) recirc, problems can begin.”

Creepy situation #4:  A point-of-distribution, ASSE 1017 mixing valve (or, for that matter, even the ASSE 1070 valve) that does not have a full- or completely-closed function for its inlet port can cause thermal creep if not properly piped; most mixing valves with an electronic actuator have a fully-closed position so that this doesn’t occur.

Manufacturers have stepped in to help negate the risk of domestic water creep when recirc systems are installed. “Installation instructions are more explicit and the technology has improved,” said Mayo.

“The problem begins when there’s an inability to dissipate the heat during periods of no demand,” added Mayo. “As referenced earlier, some [DHWR] devices close the hot side better than others, so both the built-in control strategy may help, as does the installation piping. Of course, the recirc shouldn’t be running when the distribution system’s already sufficiently full of hot water, readily accessible at taps and other points
of use.”

As Mayo stated earlier, ASSE 1017 thermostatic valves installed at the water heater or heat source may not close off sufficiently in some instances (while the circulator is running) to stop the outward flow of heat. If this happens, and a recirc pump continues to run, temperatures within the distribution piping creep upward – creating the potential for unexpectedly hot water at taps.

In a situation like that one, the need for hot water [in the distribution piping] is satisfied, but if the [DHWR] pump’s running, ‘creep’ can occur,” concluded Mayo. “Yet another solution protects users from unexpectedly high temps at the tap with or without replacement of the distribution safety valve – and that is the installation of 1016 or 1070 point-of-use valves. They’re most often used for commercial installations, though there are many residential uses of the valves.”