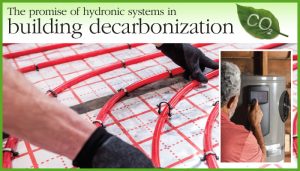 When people set their thermostat or take a hot shower, they usually aren’t thinking about their heating system or water heater. For the vast majority of households, the technologies heating and cooling their spaces and water are out of sight and out of mind, each one in charge of a singular, but important, job.

Yet as North America adds more renewable energy to the grid and more communities commit to building decarbonization as a way to reduce greenhouse gas (GHG) emissions that are fuelling climate change, demand for energy-efficient radiant designs, which use water to heat or cool interior spaces, and heat pump technology for domestic hot water heating is expected to grow.

Besides using less energy, radiant heating systems and heat pump water heaters (HPWHs) can help grid managers by storing thermal energy (hot water) for later use. This makes them attractive to grid managers who are looking for low-cost, readily available technologies to store excess renewable energy (mainly wind and solar) from the grid and deploy it during times of peak demand (or peak load), when the grid is powered by fossil fuels. This is especially true in cold climates such as much of Canada where there is a winter peak demand for electricity.

Grid-connected, energy-efficient radiant heating and cooling systems and HPWHs can play a key role in building decarbonization, which eliminates emissions at the building as well as at the generation source. Radiant heating and cooling systems are 20 to 60 per cent more energy efficient than all-air systems, depending on type and climate zone, according to a 2017 report led by New Buildings Institute (NBI) and commissioned by the California Energy Commission.

HPWHs are two-to-four times more efficient than other water heating options in conventional applications. Many of today’s models are equipped with advanced controls, which will allow for two-way communication with the grid, further advancing the role this technology will play in grid management in the future.

Why start with space and water heating?

Buildings are responsible for 39 per cent of global carbon emissions, making them a key strategy to limit global warming to 1.5°C as advised by the United Nations Intergovernmental Panel on Climate Change. Canada has committed to reducing its GHG emissions to net zero by 2050. And some of the U.S. and Canada’s biggest cities, including Vancouver, BC, Seattle, WA, and Ithaca, NY have passed building electrification policies as a way to accelerate their path to zero energy.

Experts agree that electrifying building end-uses − space heating and cooling, water heating, cooking and laundry − and generating electricity with emissions-free sources is the best path to building decarbonization. Today, space heating and cooling represents the largest energy use in Canadian and U.S. homes, followed closely by water heating. Combined, these two energy uses represent roughly 70 per cent and 81 per cent of U.S. and Canadian household’s energy use, respectively.

The current building stock is heavily supplied by natural gas with standard furnaces combusting fuel − typically, gas or oil − onsite to generate heat. The vast majority of hot water heaters run on electricity or combust fuel – also typically gas or oil − to heat water. NBI found that swapping out gas water heating systems to electric in new and existing buildings in the U.S. over the next 20 years would cut GHG emissions by 100 million tons.

Additionally, the public health benefits resulting from eliminating combustion appliances from buildings is significant. There is growing concern about public safety issues and economic consequences of outdated gas infrastructure.

Median energy use intensity (EUI) for buildings with radiant cooling is 14 to 66 per cent lower than standard buildings of comparable type and climate zone, according to a 2017 study led by NBI.

That same study found that offices with radiant heating use 31 per cent less energy while also scoring higher among building occupants for satisfaction. This is in part because radiant heating and cooling systems decouple ventilation load from space cooling load, which is typical of all-air heating and cooling systems. This reduces energy use by fans and pumps, creating tremendous energy savings during the heating season.

HPWHs are a mature, decades-old technology that can support the implementation of electrification policies across North America. They work like a refrigerator in reverse, using an electric compressor to move heat from one place to another. Compared to standard electric resistance hot water heaters and gas-fired hot water heaters, HPWHs produce up to four times less carbon emissions.

The cost of HPWHs has come down in recent years, thanks in part to market transformation efforts such as the Advanced Water Heating Initiative in the U.S. and the Greener Homes Grant in Canada.

When you factor the benefits of grid connectivity into the cost of a HPWH (in locations where utilities offer incentives for energy storage), the costs are becoming more comparable to standard electric resistance and gas-fired hot water heaters, especially with rich utility incentives.

In some places, utility companies are offering incentives to customers to swap out equipment. They are also studying how much to pay customers with grid-enabled HPWHs for the electricity they did not use during peak demand/load.

Water heaters generally last for 12 to14 years, which means that by 2035 all water heaters currently in use will likely need to be replaced. Manufacturers will soon be coming to market with low-power, 120-volt HPWH models that can plug into existing wall outlets without requiring panel upgrades and/or home rewiring. Once validated it has potential to revolutionize the market and make retrofitting buildings with HPWHs more affordable.

While the technology is promising, widespread adoption of radiant heating and cooling systems, and HPWHs faces a number of challenges in the buildings sector. Building owners need better education about the benefits of energy-efficient, all-electric alternatives. HPWHs are currently a very small part of the market in the U.S. and Canada.

Without incentives or tax and rate subsidies, many lower-income households will not have the means to cover the costs of  buying and installing low-emission appliances in new buildings or swapping out equipment in existing buildings.

With Canada and the U.S. committing to a 100 per cent carbon-free grid by 2035, fossil-fuel space and water heating will become a greater share of strategies to reduce the GHG footprint.

A key part of the Canadian government’s electrification heating strategy is the use of heat pump technology, particularly cold climate heat pump technologies that work effectively for both air and water heating in the country’s extreme winter weather. The U.S. Department of Energy’s E3 initiative seeks similar goals. With these intentions, radiant heating and cooling systems and HPWHs will play an increasingly important role in reducing emissions and helping with grid management.

Amruta Khanolkar is a senior project manager for NBI based in Portland, Oregon. She is the program manager for the Advanced Water Heating Initiative (AWHI), a U.S. effort working to transform the water heater market and install HPWHs across the U.S.