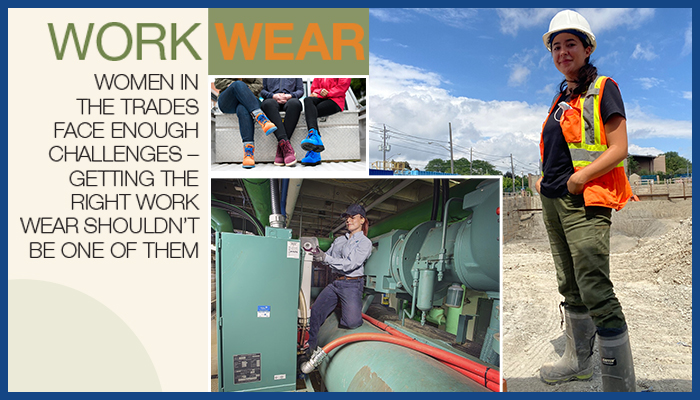 Brandi Ferenc remembers walking onto one of her earliest job sites 17 years ago when she started her career as a refrigeration mechanic, wearing the only workwear she could find in her size. “It was men’s clothing, and it was very uncomfortable,” she recalls. “The pants were too long, the waist sat in a weird place, the shirts would go down to my knees and the sleeves were horrendously long. The overall fit was huge. One guy on site said I looked like I was coming to work in my dad’s clothes.” She laughs about it now, but adds “it’s a real safety hazard because I work around lots of moving equipment like fans and belts and pulleys, and sometimes we do have to troubleshoot while equipment is running.”

Finding work wear that both fits and functions on the job is a common challenge for women working in the skilled trades. The good news is that manufacturers are realizing one-size- fits- all options and lower-quality women’s lines no longer cut it. Instead, more companies are offering more durable, functional and professional-looking work gear designed specifically for women.

Today Ferenc, who holds a 313 A Red Seal licence and Gas Technician 1 licence, is in-house mechanic at Southlake Regional Health Centre in Newmarket, ON, where she is responsible for maintaining the hospital’s HVAC/R operations. Because she works in a variety of environments, including patient rooms, Ferenc wears a full fire resistant-rated uniform from Carhartt that includes a tapered shirt with shorter shoulder lines and sleeves, and smaller front pockets. “This is the first uniform I’ve had that really fits so I look the same as everyone else in that respect.”

Many companies avoid shirt sizing issues by ordering women’s T-shirts featuring the company logo, but durable work pants are often much harder to find, especially in retail stores, which tend to carry fewer sizes and choices for women due to more limited demand.

Dovetail Workwear makes utility style pants and overalls for women in a range of jobs, including the trades and outdoor occupations. “The reason pants are Dovetail Workwear’s bread and butter is because historically they were just inferior relative to male workwear,” says Mark Smith, marketing director at In-Sport Fashions Inc., Dovetail’s Canadian distributor. “The canvas was always too thin, pant legs were too wide, and sizes did not do a wide enough range.”

Smith says Dovetail’s products are “designed based on the female form. This allows us to shape the products in areas that a unisex brand potentially won’t even think about. We care about everything, but again from a woman’s perspective, such as the rise, numerous inseams to cater to, as many heights as possible, and comfort is of utmost importance.” He adds that the brand “also works hard on choosing colours and prints tradeswomen will like.” 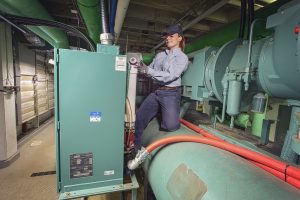 “I had a very hard time finding pants that were a good length and that fit me properly, that had good knee coverage and had the pockets that I need,” says Jessica Bannister, a level 3 HVAC apprentice and operations manager at Port Coquitlam, BC-based Cam Cool Refrigeration Inc. “I started out wearing a heavy-duty pair of jeans, but I figured out very quickly that they didn’t work,” she says, adding that finding the plain black work pants she needed for her uniform was difficult as well.

Bannister also discovered that the quality of female versions of some products was often inferior, wearing out well before they should. Eventually she found Helly Hansen’s Luna Construction pants that she says have “solved all of my problems.”

Function, fit and safety were key for Alicia Woods when she launched Covergalls in 2011, a Sudbury, ON-based manufacturer of women’s work and safety wear. Woods, who has worked in the mining industry for more than 20 years, designed the first pair of industrial coveralls for herself after experiencing the hazards of working underground in ill-fitting clothing and PPE that isn’t designed with women in mind. Working with a local seamstress, Woods set out to redesign the men’s garment to fit properly and function on a job site.

“We essentially took an idea from old-school long johns with a rear trapdoor, and incorporated it into the coverall, and we put a two-way zipper in the front so you could just zip up and not have to take everything down,” explains Woods. “We really focused on areas that hung down too far in the men’s version, the crotch, the armpits, the sleeves, so that it was more of a true female fit rather than men’s made smaller.”

As well as its signature overall, Covergalls now makes work shirts, cargo pants, bibs, safety vests, and high-visibility shirts and safety gloves, the latter designed with Mechanix Wear. “We’re also engaging with another Canadian glove manufacturer to expand the offering to look at welding gloves and maybe higher cut-resistant gloves,” says Woods, noting that a lot of new product development “comes from collaboration with clients who have a need and haven’t been able to find anything.” 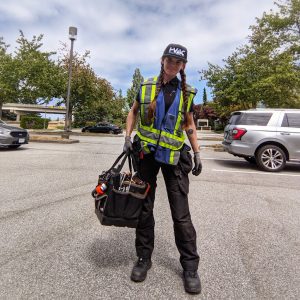 Better-fitting clothing not only functions better, it’s simply safer, says Woods. “It just boggles my mind when we talk safety all the time and yet the most basic form of PPE doesn’t fit or function. And we’ve heard so many stories from women getting their clothing caught in equipment.”

Basic PPE such as safety goggles and high-vis vests are often hard to find in smaller widths, and gloves that are small enough while offering the dexterity that techs require is a particular issue. “I was complaining on Instagram about having trouble finding gloves that fit me and that didn’t fall apart, and Korean manufacturer Lio Flex reached out to me,” says Bannister. “The gloves are fantastic and they have a variety, including a cooling pair and a cut-resistant pair.”

As an environmental site assessor, Constanza Maass works on construction sites making sure that contaminated soil is removed before projects begin. “So I need full PPE,” she says. “Starting out three years ago my employer would provide some of my gear, my shirts and jackets, and I started realizing that none of it fit well. I had to roll up the jacket sleeves twice, it just looked really bad, and luckily I wasn’t working around machinery at the time because it’s just not safe to be wearing gear that is loose.”

While she has found products that work, including pants from Dovetail Workwear and Duluth Trading Co., Maass says frustrating themes that keep coming back include quality, cost and colour schemes. “Just make the gear look like the men’s gear. I personally don’t want to stand out when I’m on site, I just want to show up and look professional. And for me this is a big aspect of it, the sense of belonging at work. And it’s a big part of the inclusivity that we’re trying to bring to our sites, looking the part and feeling good in your gear.”

Helly Hansen launched its women’s Luna collection in winter 2019 with a base layer collection, then expanded into trades in spring 2020. “Most companies ‘shrink it and pink it,’ so to say, whereas at Helly Hansen we took feedback from professional women in the trades which focused on fit, comfort and blending in,” says company representative Matt Glass. “Our women’s collection features the same technology, innovations and fabric as the men’s line but is fitted to suit women’s silhouettes in terms of fit, movability and at times, pocket placements.”

The collection will be expanded in fall 2022 with the company’s BRZ design concept. “With the use of lighter weight materials (250 g/m2 or less) and ventilation, we’ve built in climate regulating comfort,” says Glass. “This new product construction works best for those mixing their time working indoors and outdoors where temperatures can vary drastically.”

Although there are now more clothing options available for women in the trades, there are still barriers such as cost and availability issues. Ferenc is hopeful those barriers will start to fall as more work wear manufacturers re-evaluate their women’s lines.

“We’re out here in the workforce, and we’re doing the same job as our male counterparts, so we do need the same quality work wear, as well as the accessibility to be able to grab things off the shelf when you need it,” says Ferenc. “Because you need to make sure that you’re wearing clothing that fits so you can work safely and comfortably, whatever climate you’re in.”

Electrification of the HVAC Industry