It isn’t every author who can count Stephen King among their fans. King has referred to international bestselling author Linwood Barclay as “a master of suspense.” Barclay’s own story is full of twists and turns, and a slow steady build to his becoming one of Canada’s most successful living writers.

Barclay was a columnist for the Toronto Star for many years, writing his novels sporadically with limited success before getting a big break in 2008. His fifth book, No Time for Goodbye, was featured on the BBC’s Richard & Judy summer reading list and took off in the UK, followed by Spain, Portugal and Japan. “That was almost like getting shot out of a cannon,” says Barclay.

It wasn’t long after that he became well known and popular in North America. “That was really the point where I left my day job. I am a fiscally conservative person. Who leaves a job with a dental plan, a pension? Who would dare do such a thing? But I thought, I can do this now,” recounts Barclay.

Since then, he has written more than 20 novels. Not to be pigeon-holed, his repertoire is impressive. He has written a memoir, children’s books, anthologies and political commentaries, along with what he is best known for, thrillers. Many of his books have been optioned for film and television, a series has been made in France, and he wrote the screenplay for the film based on his novel Never Saw it Coming.

“All I ever wanted to do when I was a teenager was to write movies for television,” says Barclay. “Now that I have the opportunity; I find out it’s a bit frustrating. In the movie and TV world a lot of work gets done that never comes to fruition.”

With a seemingly inexhaustible reservoir of ideas, Barclay’s aptitude for clever plots has fans eager for each new release. In the realm of how did they ever come up with that idea, Barclay has completed a book that is waiting in the wings and promises to deliver a healthy dose of suspense. “I did this other book about three years ago. It is different than anything I have done. I call it Jurassic Park with self-driving cars. We aren’t sure what we are going to do with it but we have come up with a title, Look Both Ways,” says Barclay.

His most recently released book, Find You First, is full of twists and turns, and offers an inventive take on what could happen if …

Since this interview, Barclay has tweeted: “the title of my next novel, out in 2022, is (drum roll, please) Take Your Breath Away, because that’s exactly what it’s going to do when you read it.” The book will be released in Canada on May 17. 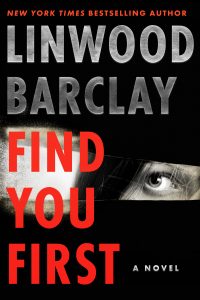 “Starts with a bang and ends with an even bigger one. Barclay is a terrific writer, but he’s outdone himself with this. It’s the best book of his career. I couldn’t put it down, and you won’t be able to, either. If you enjoy thrillers, this is the real deal. It never lets up.”

Stephen King on Find You First

Barclay was just four when his family moved to Canada from the United States. His father was a talented commercial artist and a skilled carpenter. “He worked in Toronto creating drawings of Fords and Chevrolets and Cadillacs that would appear in the pages of Life, Look, The Saturday Evening Post. He even had the same agent as Salvador Dali for a time,” says Barclay.

The onset of photography created less demand for commercial artists and his father found himself out of work. Barclay’s mother’s desire to leave the city to live her dream by owning a trailer park ruled. Barclay was 11 when the family made the move to Green Acres near Peterborough, ON.

At first the cabins and trailers nestled on the banks of Pigeon Lake, along with acres to explore, were the stuff of kids’ dreams, but when his father died 16-year-old Barclay become the caretaker and repair person on the property. His mom didn’t like to hire professionals, preferring to save money. Barclay notes he doesn’t ascribe to that thinking “we always call professionals.”

“My daily chores included cutting nearly 10 acres of grass, cleaning toilets, fixing broken pipes − there was always one bursting somewhere, burying deep in the woods the fish guts left behind in a pail after our guests cleaned their catch at a table down by the lake, selling gas, scrubbing out boats littered with seaweed, worms and dirt, and ensuring there was a steady supply of toilet paper in the communal bathrooms,” recalls Barclay.

With an interest in and a flair for writing from a very young age, Barclay would craft stories while on the riding-mower.

He met his wife Neetha while attending Trent University. After graduating Barclay accepted a job at the local paper and was permanently relieved of his fix-it and caretaking duties at Green Acres. He moved to the Toronto Star in 1981 and eventually landed a gig there writing a humour column until he decided to become a full-time novelist. 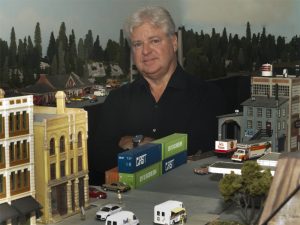 Barclay was first introduced to model trains by his father when he was five or six. Today Barclay has an impressive train setup in his basement. A disciplined writer who puts in a full working day, he likes to unwind by working on it or just looking at it.

“When you spend your whole day imagining a world on a computer screen, it is nice to work with your hands and clear your head.”

After a move to Toronto a few years ago he had to reconstruct the layout. “ I got a lot of help from our son Spencer. He is working for Little Canada building amazing things. When the pandemic restrictions aren’t in place, he has been over here building amazing things in my basement, like the Niagara Escarpment.”

*Little Canada is the Canadian landmarks in miniature attraction in Toronto.

Electrification of the HVAC Industry

Can employees be terminated for refusing to get the COVID-19 vaccine?