Getting a grip on pipe joining 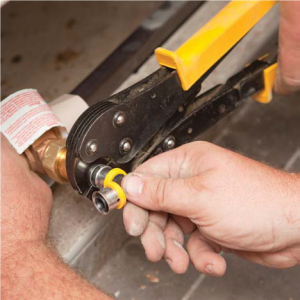 After years of soldering pipe with varying degrees of finesse and success, I wondered when a better pipe joining technology would appear, especially in service work where water in the pipes is a problem and pipe freezing isn’t an option. You just can’t get a proper solder joint or raise the temperature enough to melt solder.

There was an old Red Seal question: how do you solder with water in the line? The answer was to push a chunk of bread (fresh soft bread rolled into a ball worked really well) into the line to temporarily absorb the water while you soldered the pipe. After it was soldered, the bread would dissolve in the system and shoot out the taps. That was all we did for 30 years or so. You know you are getting old when the only joining methods you’ve done are soldering 50/50 (now used only on DWV, due to the high lead content), ABS gluing, some lead and oakum, and poly-B crimping.

More recently, there are new alternative methods with press connection tools as well as heat fusion on thermoplastics. When manufacturers came up with a new way of pressing metal pipe and fittings together, we took a wait and see stance at SAIT. Our philosophy is to let a product work out its bugs before really using it in class.

TAKING IT TO THE PEOPLE 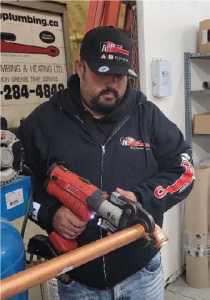 I investigated the press method on the internet, and asked questions in the industry and in the classroom: Do you like using a press tool? Is it easy to use? Does it hold up to pressure? Are there many leaks from it? Can you use it with different pipes? Is it used commercially and residentially? Is it expensive? Does it last? Can you rent the tools? Would you buy the tools? Will this method solve leaks with water in it? Will it save time?

You still have to prepare the pipe, deburr and clean after cutting it. Then it’s pretty easy, place the jaws over the bead of the fitting and press the trigger and it will crimp it. It’s quick and easy.

The consensus among those who responded is that it holds up to the same types of pressure as typical soldered copper joints. I posted an inquiry on my SAIT fourth-year apprentice plumber/gasfitter Facebook site of which there over 600 journey person members. Most people liked it, except one reporter of a leak who admitted that he either did not properly deburr or crimp it.

The applications for press connections include ½-in. to two-inch PEX, ½-in. to four-inch copper, and ½-in. to four-inch carbon steel and stainless steel. There are different jaws depending on the type of pipe. Press connections can be used for both residential and commercial applications, however they seem to be used more frequently on commercial new construction. Press connection tools and fittings can be pricey, also a reason why this technology is more prevalent commercially. In some areas the tools can be rented. Cost is also relative to time saved, which in some cases would make it more affordable.

Do the tools last? Time will tell, but press tools do seem to have decent warranties. After all this investigating, I went to A&B Plumbing & Heating’s shop to ask them about press technology and to see a demonstration. As a service company they are impressed with press technology. Managers Dean Campbell and Brennan Schumaker say that their servicemen use press connection tools daily. only wish I had one back in the day when I was fixing leaks with solder and a bag of bread.

WHAT SOLDER HAS JOINED TOGETHER LET NO FORCE PUT ASUNDER 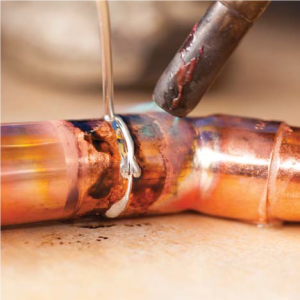 When I first apprenticed in 1977, the coolest thing to learn was soldering. This marriage of pipes through melting 50/50 (50 per cent tin and 50 per cent lead) solder would begin to melt at 421º F, with a working range of 60º F, it would then solidify at 361º F. It was during that 60º F solvent stage that you worked wonders.

Using approximately the circumference measurement of the pipe in solder, you would heat up a copper fitting and pipe, which was properly prepared using sand cloth and flux, and the silvery substance of solder would slide into the joint. I became quite good at soldering. It was like an art form to me when I used just the minimum of solder to seal a joint, thereby not wasting solder and creating a clean joint.

After about a year in the trade, I took a couple of years off and went to Europe. Upon my return, I decided to take up plumbing again and the first job I worked on was a multi-unit townhouse structure. They put me on the copper water sizing crew. It just happened they put me with another apprentice who had prepped something like 20 units by assembling the copper pipe (sand clothing, reaming and fluxing). As I was soldering the pipe, many joints did not seem right, the solder just didn’t flow in a way I was used to. I ended up using lots of solder and many joints were like solder blobs on the fittings.

Being young and under the gun, I felt I should just get it done. This ended up being very embarrassing, as there were as many as two to three leaks per unit after testing them. I figured well, if you can’t solder shouldn’t be a plumber. It was then that I discovered the other apprentice had not sand clothed many fittings and used too little flux. I resolved to never let anyone else prep my copper when soldering.

After that experience I was hired by a service company. I went with another plumber, Paul Andrews, for a couple of days of field work. He was very entertaining as we drove around Calgary fixing plumbing problems. I couldn’t help myself so I began to boast about my soldering skills trying to impress him. Sure enough, the  next service call was an old house in the  inner city that had a copper leak on the water service just downstream of the main shutoff.

It was in a clothes cupboard in the basement. Andrews turned the water off, started to drain the system and prepared the fitting properly. I barged in and said let me solder it. He accepted my offer and handed over the acetylene torch. I commenced to heat up the valve and applied the solder until it melted. I built up a cold bead on it just in case.

After that my solders were near perfect with very few leaks, although I no longer cared about clean and tidy joints. I used a lot of solder making sure my joints didn’t leak.