Will this low-carbon gas transform the heating industry in Canada? 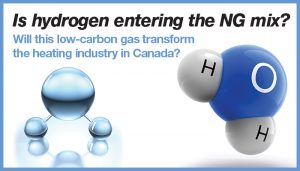 Scientists worldwide have looked at hydrogen as an energy source for the more than a century and focused on applications such as fuel cells. Unfortunately, hydrogen technologies have not had much success being commercialized.

This is about to change radically.

Because of the targets of the Paris accord on climate change for greenhouse gas reductions and achieving net-zero emissions, global energy systems are set to significantly change with hydrogen leading the way as the most available and reliable alternative to reach these lofty goals. Governments worldwide, including Canada, have started work on strategies to incorporate hydrogen into the low emission energy mix.

Our country is a top ten producer of hydrogen and in December of 2020, Canada launched a new hydrogen strategy to assist with meeting the country’s climate change obligations. The Hydrogen Strategy for Canada “seeks to modernize Canada’s energy systems by leveraging Canadian expertise through building new hydrogen supply and distribution infrastructure and fostering uptake in various end-uses.”

“End-uses” include fuel for transportation, power generation and heat for buildings. The use of hydrogen for building heating will significantly impact heating products and the supply chain. One of the first steps being pursued as a part of this strategy is adding hydrogen into the mix of natural gas (NG). Adding hydrogen will reduce the greenhouse gas emissions (GHG) of NG.

Space heating (at 60 per cent) and water heating (at 19 per cent) are the largest NG uses in homes. Hydrogen is a solution for gas utilities because it can be produced in large volumes. Other GHG reducing gases, such as recycled natural gas and landfill gas, are in limited supply. Countries including Germany and the UK are already piloting the use of hydrogen/natural gas blends for home heating.

As reported in a March 17, 2021 AHRI webinar titled “Hydrogen- Enriched Natural Gas for Heating Products,” initial studies on adding hydrogen blends into the natural gas grid have identified a number of technical concerns for NG system components, including heating appliances such as water heaters, furnaces, boilers, etc. An important factor in the feasibility of using hydrogen/ NG mixtures is determining that the installed base of heating appliances will operate safely and meet standard performance levels.

The key to solving these concerns seems to be the hydrogen blend ratio. Recent laboratory testing of hydrogen/NG blends by the American Gas Association indicate that a maximum hydrogen blend ratio of 15 per cent will not adversely affect current heating appliances. It is important to note that this testing did not include field installed appliances. Other concerns include the new mixture causing appliance input and output reductions, which increases energy use to achieve current output levels.

“Hydrogen blends are needed for the gas industry to remain relevant in a net-zero energy world.”

So, what does this mean? What we know is that developed countries are seriously looking at hydrogen to be a “saviour” for meeting GHG targets under the Paris accords. The natural gas industry also understands governments will only accept gas use for heating long term if GHG emissions are reduced. Hydrogen blends are needed for the gas industry to remain relevant in a net-zero energy world. Solutions to the challenges of using hydrogen/NG blends for building heating are being aggressively pursued. Will this transform the heating industry in the near term? Probably not but HVAC contractors should be aware Canada and at least eight other countries are committed to the hydrogen alternative. Europeans claim all gas appliances can be designed for100 per cent hydrogen use in the future.

It’s anyone’s guess when this change will find its way to the frontline people in the HVAC industry. But it does sound as though the hydrogen alternative is coming faster than expected.