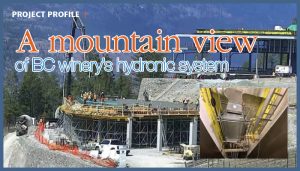 A multi-phase construction project at O’Rourke Family Winery in Lake Country, BC is a living testament to the versatility of hydronic heating and cooling. This design/build effort began three years ago and is scheduled for completion by the end of 2021.

The design of the massive complex of multiple buildings is impressive by any standard. Situated on top of a rocky outcrop, the winery required considerable excavation over the course of building five separate structures: an auditorium, residential suites, the production facility, a family residence and an event centre.

Especially noteworthy is the production area, where the fermentation, bottling and warehousing takes place. It’s actually part of a cave system bored into the rock, and features some 300 meters of tunnels, and a total of 12,000 sq. ft. of cave space. As daunting as this scale sounds, it’s second nature for the owner, a general contractor experienced in massive commercial projects, says Michael Crutchley, senior mechanical engineer and discipline lead at Ecora in Kelowna, BC. “This was a signature project for him, using a design/build approach.”

So how does one go about heating and cooling a multibuilding complex in stony terrain? The only answer that made sense was a hydronic heating and cooling system, says Greg Burke, sales engineer at Trane Kelowna. “It just made sense to go hydronic from a maintenance and efficiency standpoint, because it allows them to build off a central system. A main advantage is that hydronic uses low noise chillers, which minimizes sound throughout the buildings.”

Hydronic was the only practical choice for a project supplying heating and cooling to separate buildings, Crutchley confirms. “Installing hydronic loops from a central plant was the only way we could do this relatively easily, because we had to drill through rock to connect them. We couldn’t just run heating ducts between buildings, since you would need to have dedicated mechanical rooms for each building, which was not a practical solution.”

The design specified boilers and chillers to feed a series of 30 per cent glycol hydronic loops going out to the various facilities. The central mechanical plant delivers heat transfer fluid to multiple heat exchangers and fan coils at each building for forced air heating and cooling, with additional slab heating systems in specific areas.

A tough call in the early stages was determining how big to make the boilers and chillers, Crutchley notes. They finally decided to start with two 1200 MBH boilers running in parallel, and two roof-mounted 76-ton chillers. “Everything is in parallel for alternating operations and dealing with turndown.” Two additional tankless 400 MBH boilers, plus a 750 MBH boiler, are used for domestic hot water (DHW) and processed DHW applications. Other mechanical plant equipment includes water softeners with charcoal filters for dechlorinating the water used in the wine making process, air compressors, and nitrogen generators used for tank blanketing during fermentation and aging.

Burke says that in addition to the four chillers, there is also a dry cooler on the roof for free cooling, which is used to support the wine making process. “You need to make cold water year-round. The dry cooler operates when the outdoor temperatures are cool enough to use ambient air instead of using the compressors year-round to deliver energy savings.” The entire heating and cooling functions are centrally controlled through a distributed control system (DCS).

An important consideration was the fact that temperature settings vary depending on the facility. Using heat exchangers in the different buildings allows them to decouple the temperature control from the main loops, Crutchley explains. “Primarily most buildings are maintained at ASHRAE 90.1 temperature requirements (70°F for heating and cooling), but for wine storage for example, the temperatures need to be lower.”

The piping required for the entire effort has been substantial. Two main large-diameter piping loops (minimum six inches and up) feed the fluid to five sub loops servicing each building. One main loop connects to the boilers, a second to the chillers. There are five cooling and five heating loop tie-ins in each building, along with two heat exchangers and multiple fan coils, to deliver the forced air heating and cooling. Slab heating is being used to supplement the fan coils in some areas, such as the auditorium or for snow melt systems.

Overall, there is an estimated one kilometre of piping in the main loops − and an additional two kilometres for the sub loops, making it one of the largest hydronic systems in the region. “There’s a lot of piping in that system!” Crutchley says.

While the project has several months left to go, the hydronic system has provided the underpinnings needed to manage all aspects of the heating and cooling for the foreseeable future. In the meantime, the winery’s work is moving full steam ahead: it has now fermented its first batch of wine in the brand-new production facility. Cheers!

Mechanical Business thanks Aldes Amérique du nord for its assistance with this article.

The Ingredients at work

Wine making is a complicated business that takes a lot of moving (and non-moving) parts. Here’s a list of what was needed to get things up and running:

All that to supply a space including:

What have HRVs got to do with it?

Interesting features of the winery build include the five advanced commercial heat recovery ventilators (HRVs). Each HRV handles airflows between 1,000 cfm and 3,000 cfm. “They are plate-to-plate heat exchangers, used to recover heat from the exhaust air stream and temper makeup ventilation air for the facility,” Burke says.

As Crutchley explains, fermentation requires substantial ventilation, as it generates high levels of carbon dioxide. “All outside air goes through the HRVs to recover energy.”

Boost By Jobber offers business owners up to $100,000 in grants 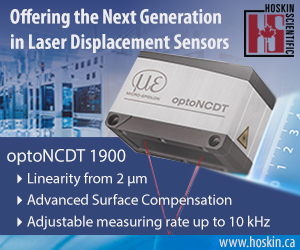