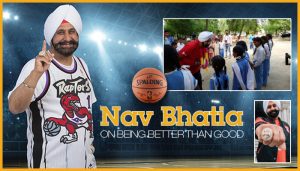 Nav Bhatia, best known as the Raptors “Superfan,” sees speedbumps where most would see roadblocks. A resolute and optimistic outlook has allowed him to come out ahead, in spite of facing discrimination and a rocky start to life in Canada. His great success as a businessperson has afforded him the resources to pursue his real passion: Bhatia never misses a Raptors home game, or any opportunity to gather with others and share in his love of basketball. From buying thousands of tickets to bring children and minorities to Raptors games, to organizing the Raptors’ annual Sikh New Year celebrations at Scotia Bank Arena (previously the Air Canada Centre) in Toronto, changing perceptions about the Sikh community remains a priority for Bhatia.

“You know, the second day [of lockdown] I thought, I’m “stuck” at home. I mean, that’s not good. So, I bought a food truck. I said, I’m going to have to start getting food and delivering it to frontline workers. In three months, we delivered 13,000 hot meals to the frontline workers, police, fire, nurses, hospitals, and long-term care centres.”

Trained as a mechanical engineer, he worked in the family business in India. “It was one of the largest manufacturers of sunglasses and frames for the optical niche. We were also the supplier for the Indian army and government,” says Bhatia. But everything changed in 1984 when the anti-Sikh massacres left between 3,000 and 7,000 Sikhs dead. Bhatia left India to start a life in Canada. His entire family joined him, one by one, over the course of five years. “We started life again in this beautiful country, Canada.”

When he arrived, he searched for work as a mechanical engineer without any luck. “I got the message after a couple of months, after knocking on a lot of doors. I wouldn’t get a reply back on my resumes, and I figured out I was not going to get a job in engineering with my beard and turban.”

Determined to earn a living he did odd jobs – janitorial, landscaping and painting – anything to pay the bills. “I finally ended up with a full-time job at Rexdale Hyundai in car sales,” recounts Bhatia. The job was not without its challenges. “Everybody used to call me names and make fun of me. On the first day I decided, I’m not getting an engineering job, so this is going to be my job. I told myself, if you want to survive in this environment, you have to be better than good. I went on the floor and sold 127 cars in three months,” says Bhatia.

That number of car sales is still impressive today. What is Bhatia’s secret? “You should know your product; being an engineer, I knew a little bit of the technical stuff and that was an advantage. But you know what? In the end, treat people like you want to be treated yourself. That’s the key to success.”

Today Bhatia owns five Hyundai dealerships, including the dealership where he started his career.

On the home court

Sanitation for a nation

Bhatia’s roots in India and love of children inspired his most ambitious endeavour: to fund washrooms in schools, as a means to overcome a major impediment to girls’ education. Approximately 47 per cent of schools in India do not have separate washrooms for females. The Superfan Nav Bhatia Foundation, in partnership with World Vision Canada’s Rise Up Daughters of India Initiative, set out to change that. Bhatia traveled to India for the first project. “I gave them the money, but because it’s a third world country, I wanted to make sure that these washrooms were actually being built. My faith and trust in World Vision India went sky high: they were honouring our agreement, and no money was being wasted,” says Bhatia. To date, over 180 washrooms have been built or renovated across 36 schools in Faridkot, Punjab, improving the lives of more than 4,000 girls. The next project will be in another impoverished area, and involves the construction of 100 washrooms and two basketball courts.

Putting the fun in fundraising

Much of the financing for Bhatia’s foundation comes from his commercials and cameo appearances. You can find Bhatia in any number of videos on social media, whether he is in the drive through at his favourite coffee spot (Tim Hortons) or in his kitchen unloading a grocery delivery (Voilá by Sobeys) or even frantically trying to transfer money at his wife’s request so he can get to … what else, a basketball game (Xoom app). When companies approach him, Bhatia first and foremost considers whether the product or service he is promoting is in keeping with his values. If it passes that test, he views every gig as “one more, or many more bathrooms” and perhaps even a new basketball court for marginalized youth here or in India. His next venture is with Zerv’s Home Run fitness app: Bhatia will lead family-oriented workouts, which he laughingly suggested the company make “light,” given his age. During these troubling times, it is a joy to see Bhatia’s youthful enthusiasm and smiling face, whatever role he is taking on.

Bob (Hot Rod) Rohr: An Educator and a Gentleman