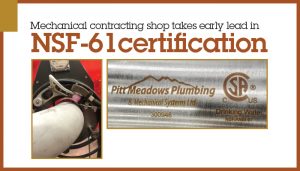 Achieving CSA NSF/ANSI Standard 61 (NSF-61) certification for drinking water system components is nothing out of the ordinary for a lot of organizations in the manufacturing sector. But it’s rare to see a mechanical contractor get the certification. That’s just what the stainless steel pipework fabrication team at Pitt Meadows Plumbing & Mechanical Systems Ltd. (PMP) managed to do.

As most in the trade know, NSF-61 is a set of national standards related to drinking water. It establishes stringent requirements for the control of parts, pieces and equipment that come into contact with potable water or products that support the production of potable water.

For months, the pre-fabrication team at PMP worked with the CSA Group to achieve the certification for domestic drinking water pipework spools. These are fabricated in their Maple Ridge, BC shop before shipping to job sites for installation across Metro Vancouver and beyond. The company achieved the certification in July 2020.

“We have worked closely with the CSA Group to ensure that our fabrication methods and welding standards meet the stringent requirements of the NSF/ANSI-61 certification,” said Sam Revel, senior pre-fabrication manager. “Over the last few years, we have developed some of the most advanced stainless-steel pipework production methods available to the market, leveraging 3D modelling, automated machinery, and orbital welding robots.”

Most Canadian businesses with this certification are suppliers of potable water tanks, piping and materials related to the delivery of drinking water, he explained. “It’s certainly unusual for a mechanical contractor to earn the certification. Typically, NSF-61 is required for suppliers and manufacturers producing pipe and fittings. I believe we’re the first in BC that is serving the high-rise residential and institutional sectors, whilst also completing the full scope of mechanical contract work.”

The company’s pre-fabrication approach has delivered even more advantages since COVID restrictions came into play. Up to 75 per cent of each project’s installation is pre-built at the 55,000 sq. ft. Maple Ridge manufacturing facility, which has always been a highly controlled environment. “Since COVID hit our model benefits our clients and their customers more than ever, because it reduces the number of workers required on site,” Revel said. “And the layout of our facility makes it easy to distance workers and set up dividers, as well as control access and egress.”

Revel said its decision to apply for certification provided them with an opportunity to maximize the welding of stainless pipework and remove potential leak paths from every system installed to ensure consistent plumbing installations. The decision was also driven by the City of Vancouver’s recent move to require the NSF/ANSI-61 certificate to weld stainless steel pipework for plumbing systems, Revel explained.

“While the B.C. Plumbing Code allowed welding of stainless steel pipes, it was not regulated in any way, which poses a risk if correct fabrication processes are not followed. The City identified that issue and decided to rectify it by having manufacturers of domestic drinking water spools certified to NSF standards,” said Revel.

It was a relatively easy transition for his team, he added. “The shop was already meeting the standards as our fabrication processes were already very stringent. We were very happy to achieve certification without having to change anything.”

After the mandate came down, the team began working with the certification group at CSA, beginning with a full presentation in January of 2020 on the fabrication process and the different elements in the processes and materials used. The audit also included a factory visit and inspection.

Sample spool pieces of pipe were sent to CSA for testing and certification. The head plumbing inspector for the city also visited the site to inspect the shop operations and processes.

“The local mechanical contractors that have become NSF-61 pre-fabricated welding shops really need to be acknowledged as leaders in this Industry,” said Phil White, manager of trades inspections with the City of Vancouver. “The public in the City of Vancouver can have confidence that by meeting the NSF/ANSI/CAN 61: Drinking Water System Components–Health Effects certification, these certified welded stainless steel systems address human health protection and infrastructure longevity concerns.”

While the certification has not yet been required on projects, Revel believes it will increasingly become a key selling point for developers.

The focus in recent months has been on projects in and around the City of Vancouver area. But the certification can be applied further afield. “We expect to see this requirement come out in the next B.C. Plumbing Code update,” Revel said. “It will be fantastic to say we already have the certification.”

The certification is just one feather in the cap of PMP’s achievements in recent years. The company recently won a Digital Supply Chain & Fabrication award from CanBIM for its implementation of Stratus automation software for off-site fabrication, highlighting its position as one of the leaders in off-site fabrication and 3D modelling in North America.

What is replacing R-410A in the residential and light commercial sector?