Bob (Hot Rod) Rohr: An Educator and a Gentleman 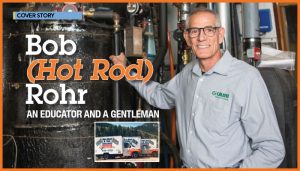 From thrill show worker at 17, to self-described “ski bum” to winner of the Carlson-Holohan Industry Award of Excellence, Bob (Hot Rod) Rohr’s career path embodies his openness to learning something new.

Rohr, who is currently education manager with Caleffi North America, Inc., has always loved to tinker with any mechanical device, so when an opportunity came along for a summer job with the American Thrill Show, he jumped at the chance. Just out of high school, Rohr was 17 and deemed “too young to do death defying stunts.”

“I graduated early and was too young to work there so I changed my age,” says Rohr.

While working there he was in his glory driving motorcycles off ramps and he even worked on cars that would later be used in stunts in a James Bond movie.

“I did that for a summer; the American Thrill Show was sponsored by American Motors which no longer exists. Once you get into it you realize that there are ways of doing things that the audience doesn’t see. “One stunt the show had was called the Astral-Spiral; the car would spin in the air and land on a ramp. I didn’t get to drive the cars because I was six feet tall. The driver had to sit on the console for it to work and couldn’t be taller than 5 ft. 2 in. The stunt took 2.7 seconds and the drunk people in the stands would turn and miss it–then they would shout at us you to do it again, which we couldn’t do.”

If the car missed the ramp Rohr and the other mechanics had to fix it and try again and again.

“I didn’t tell my mother what I was doing. Eventually they found out and did come to a show.” No doubt Rohr’s parents weren’t too thrilled about the Thrill Show.

Even though he worked on the cars, Rohr was not there to see the Astral-Spiral performed as a movie stunt. “I didn’t get to go to the movie set, outside Bangkok, where they filmed the stunt for The Man with the Golden Gun.” The stunt involved “his” car spectacularly smashing through the showroom glass window of an American Motors Dealer. Rohr did, however, witness a truck carrying cars for the Thrill Show hit a Porsche. That accident changed his future. He testified for the car owner…and lost his job.

“Tom, the mechanic whose car was hit, and I became friends. He was heading out to Utah to be a ski instructor and suggested I go with him. I didn’t know how to ski but he said he had the gear and I could learn, so I went,” recalls Rohr. “I went from a thrill show to ski bumming. I was anxious to see the country, to leave New York. I have been out west ever since.”

This month Rohr will return to Utah, the place where years ago he started a business with Richard Yox. “Hot Rod and Yox” was later sold and Rohr ran his own plumbing, radiant heat and renewable energy contracting company for a number of years before joining Caleffi in 2008.

Hot Rod’s history with mechanics started early. “I worked for my dad growing up, started way early maybe eight or nine years old on weekends and in my spare time cleaning fittings, playing with the plumbers’ putty. The carrot dad dangled was he would build me a go kart; the neighbour’s kids both had one. The go cart turned into a mini bike, as he only had two wheels to build from.

“I got my finger caught in the chain of this mini bike, that is how I lost that finger at age nine! My mom remembered it by “you will be 10 years old with only nine fingers” she never embraced the mini bike,” says Rohr.

The “Academy Award” of hydronics

On February 4, 2020, the last night of the AHR Expo in Orlando, FL the Radiant Professionals Alliance (RPA) announced that Rohr was recipient of the 2020-2022 Carlson-Holohan Industry Award of Excellence. His name joins a list of recipients, which includes such industry notables as Robert Bean, David Yates, Ingrid Mattsson, John Goshulak, Ken Webster, John Siegenthaler, and Mark Eartherton.

“This award means everything,” Rohr said afterward. “It’s like the Academy Award of the industry!” John Siegenthaler, principal at Appropriate Designs, Holland Patent, NY, and the person Rohr attributes much of his interest in “thinking beyond the manuals” to, was among those in attendance. “Bob is one of the most generous people I know as far as helping people in the trades learn how to do hydronics right,” he said.

“I wouldn’t venture to guess how many thousands of people he’s helped train. He’s a very humble guy–a character trait that is to be admired today. He’s done a lot for the industry,” said Siegenthaler.

Ellen Rohr is well-known for her books and presentations on pricing and running a profitable contracting company. Max Rohr has joined Caleffi as a trainer-proud dad is thinking this will lighten his load

When he joined Caleffi Rohr already had a lot of training experience with RPA and manufacturers but this training gig was special. “This was the first time I was paid,” says Rohr. “I started right in the middle of the recession.” The steady income, along with doing what he likes best–talking about mechanical things and travelling–have been a good mix. Rohr has been with the company for 12 years now.

Off the road now after travelling from coast to coast providing training and attending events for years, Rohr notes that “education and training is another product Caleffi offers; Coffee with Caleffi was already up to speed before the pandemic–offerings morphed into a stay-at-home training.”

With company resources he was able to make that transition successfully but there are challenges as more companies got on board with virtual. “Now there may be 50 manufacturers doing it. It is getting trickier. Contractors can’t just sit in front of the computer. They have to get on the tools and earn a living.”

We are working on solutions for contractors, thinking in terms of shorter. Maybe podcasts the contractors can listen to in their trucks.”

He has some ideas on what it takes to draw people, including doing things that are relevant in these times, and providing hands-on experiences. Most importantly, as someone who has seen some less than stellar webinars, Rohr says, “If you ask the world to come to your party you have to deliver. Give everyone in the room what they are looking for, be professional and know your material.”

As much as Rohr prepares for his training sessions, his enthusiasm comes in part from knowing he will learn something from those in attendance. He suggests industry cohorts watch social media where young people are posting some innovative approaches to design, installations and repairs. “It is neat to see the evolution,” says Rohr.

Anything that doesn’t move could be a radiator (and he’s tried, note the dog sculpture a.k.a radiator)

Memories made on Canadian soil

Where did the moniker Hot Rod come from?

Neighbours in Orchard Park, NY thought it was appropriate given his Thrill Show experience and it has just stuck

Holds a patent for the StarMax Solar Thermal collector

What do you like to do in your downtime?

Tinkering with any mechanical device, I have a pretty nice shop. I don’t golf but I do ski

What is replacing R-410A in the residential and light commercial sector?