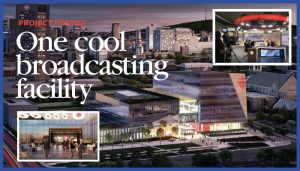 The need for fact-based journalism is more important than ever so, as a citizen, it is a relief to learn about a news organization investing in its structures instead of hearing about more cuts. One of those investments was recently completed in the form of a state-of the-art headquarters for the Canadian Broadcasting Center (CBC) and Radio-Canada in Montreal, the new “Maison de Radio-Canada.”

A new home for French-language media

In November of 2016, CBC/Radio-Canada’s Board of Directors approved a redevelopment project for its home in Montreal, known to most in the city as the Maison de Radio-Canada (MRC).

The two-part project was to include the construction of a new Maison de Radio-Canada building at the corner of René-Lévesque Blvd. and Papineau Ave., as well as a revitalization of the MRC site, performed by Groupe Mach. Officially approved in April of 2017, construction took place over the next three years.

The new facility, which opened earlier this year, is designed to provide a creative hub for Canadian French-language media for some time to come: CBC/Radio-Canada has a 30-year lease agreement to be the tenant of the building.

In addition to the media production suites, the project also includes a multipurpose room and an open multipurpose space in the atrium on ground level, along with a daycare centre with an outdoor play area, a 200-seat cafe and patio, kitchenettes on all floors, 550 lockers for technicians, an activity and fitness room, showers and change rooms for employees, indoor and outdoor bicycle parking spaces, and 234 parking spaces for cars and corporate fleet vehicles.

Coming in at 418,822-sq.-ft., the headquarters was built by La Société en Commandite La Nouvelle Maison, a subsidiary of Broccolini Construction and Broccolini Investments, with the help of Johnson Controls (JCI) for the facility’s building systems.

The MRC was built at a cost of $112 million. CBC/Radio-Canada has also earmarked an additional $175 million over the next several years to allow the broadcaster to make upgrades in the technologies in the facility, which will bring the total project cost to approximately $287 million.

To provide a comfortable work environment for employees, the project was outfitted with a Metasys building control system from JCI. “The facility control system is an open protocol, non-proprietary system that will provide a form of external monitoring and building related alarms – temperature, humidity, failure, sump high water, etc. – at a central location,” explains Paul Tawfik, director of Jonson Controls (Canada). “The system is expandable for internal renovations as well as any future planned expansions.” In addition to the building’s thermal comfort control systems, JCI was contracted to provide some of the security and data centre infrastructure.

“We were responsible for the installation of network server data racks within the data centre,” Tawfik says. “The project management team worked to deliver the data centre to CBC early, in order to ensure a smooth transition to the new facility.” As with many controls, the security system in the facility embraced wireless technology for its card readers, which helped to minimize the use of wiring and conduits, he adds.

The choice to use an open concept layout provides the ability for mobile studios to be transported and be operational throughout the building, but this mobility created an interesting challenge on the mechanical side. Changes to the layout of a studio can bring a need for adjustments to the heating and cooling system, to suit the revised broadcasting space.

And watching over everything is the building automation system, which allows facility management personnel to control the entire broadcast facility through a single interface, making changes to the environment as needed.

With constant monitoring in place, if any mechanical equipment operates outside its programmed range, the BAS will send an alert to the facility manager’s smartphone to notify of potential equipment malfunctions. This allows a technician to be dispatched as quickly as possible.

“The plumbing fixtures are commercial, institutional quality suitable for use in a public environment,” Tawfik says. “Fixtures were selected with consideration for optimum accessibility requirements and low water consumption rates.”

This improves the building’s water conservation and energy savings, he explains. The faucets specified are hard wired, hands-free, electronic units, and are equipped with by emergency power systems. “They are mounted at appropriate heights to complement the facility’s design of a highly accessible user experience for those with accessibility issues,” says Tawfik.

The BAS also assists in ensuring energy efficient operations by providing insights into any potential inefficiencies and malfunctions in the building’s mechanical systems, which is helpful information considering that the facility management contract guarantees a certain level of energy and operational savings, as well as cost predictability. 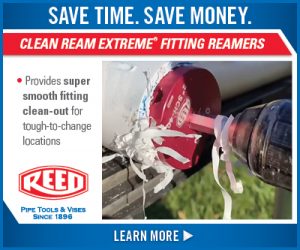