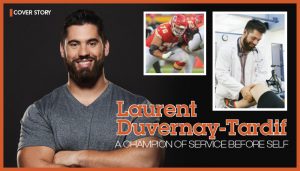 A leader on and off the field, not only is Laurent Duvernay-Tardif the first medical doctor to win the Super Bowl, and the first Quebec-born player to hoist the champion’s Vince Lombardi Trophy, but to no surprise to friends, family and teammates, he was also first NFL player to express his desire to put the health and well-being of his fellow Canadians ahead of the upcoming season. The six-foot-five lineman could have easily kept to his offseason workouts and left the crisis in the hands of others, but he could not sit idle when the call went out asking for medically trained people to help support the healthcare system in Quebec.

Not long after celebrating a championship victory with his Kansas City Chiefs teammates, he swapped jersey for scrubs and joined the staff at a long-term care facility in his home province.

“I couldn’t just stay home and do nothing,” he explained during an exclusive interview for Mechanical Business.

“In my contract, I’m not supposed to do any at-risk activities, whether that’s jet skiing, snowboarding, or stuff like that, so why would I be able to help?” he said. “I called Coach Reid and the front office in Kansas City… Coach Reid understood. He was like, ‘Do what you have to do, but just stay safe.’ And that’s what I did.”

“This is one of the most difficult decisions I have had to make in my life but I must follow my convictions and do what I believe is right for me personally,” Duvernay-Tardif wrote in the statement. “I cannot allow myself to potentially transmit the virus in our communities simply to play the sport that I love. If I am to take risks, I will do it caring for patients.”

“I see football as an amazing adventure, but there are going to be others after it,” stated Duvernay-Tardif. “I owe a lot of that way of thinking to my parents.”

Currently the owners of three bakeries in and around Montreal, his parents instilled within him a zest for pursuing passions and finishing projects to the best of one’s ability.

“I’m sure that there’s a lot of parents who would say, ‘Wait a second, you have one more year in medical school. Finish that; be a doctor, and then do your sport or something else.’ But my parents were like, ‘Shoot for the moon. Let’s do it!’” he explained.

“We only have one life to live, and it’s not a matter of living it to excess; it’s about freedom and following your passion and drive.”

Staying safe on the front lines

There are many people on the front lines of the pandemic, from those working directly with patients and putting their lives on the line to help those in medical need, to those in industries like the mechanical trade. HVAC/R technicians and plumbers have been providing essential services to ensure that safe water is flowing, that the indoor air is clean and comfortable, and that refrigeration systems are keeping food and medicine safe.

So, what should everyone be doing to stay safe during these times?

“Of course, you have to wash your hands, cough in your elbow, and not shake hands with everybody. I feel that those are the new basics,” says Laurent Duvernay-Tardif, MD. “What I think I realized after working in the long-term care facilities, is that there are people who are getting sick trying to help people; people dedicating their lives and doing overtime, isolating themselves from their families just to help prevent the spread of the disease. They are not getting paid millions to do that, and it’s a tough job.”

“I feel that we are privileged enough to have a healthcare system that is there to help the ones in need, so the least we can do is be responsible and make little individual sacrifices. At the end of the day, it’s a pretty small ask to wear a mask,” he says. “Don’t always try to cheat the system and bend the rules. Be responsible. There are people who are giving more, way more, than all those little sacrifices you are making.”

Balancing his love of the game

Finding football in his early teens, Duvernay-Tardif discovered an appreciation for the combination of strategy and physicality in the sport, and a fire continued to grow within him as he progressed from CEGEP to university, and ultimately to the NFL.

For the aspiring doctor, the path forward was going to be a busy one. Juggling school as a medical student while playing football at the university level meant sacrificing to find time for classes, homework, training, practices and games. But the combination of sport and work seemed to allow him to improve in all aspects of his life.

“At McGill, I played football because I enjoyed it,” he explained, “and because I needed it to channel my excess energy so that I could study better.” His workouts, he found, helped with his ability to study and absorb the materials for his courses.

During his pre-draft visits with teams, several teams asked whether he could be 100 per cent committed to football as an NFL player, because he had medical school in his back pocket.

“Honestly, I didn’t really have an answer to that,” he said. “If you are there, in the interview room, it’s because you love football, and that should show since you have such a good Plan B. When I first met Coach Reid at Kansas City, he felt the same way. He said, ‘I need 53 players on the team that really love football.’”

Still a medical student after being drafted to the Chiefs, Laurent’s structure was suddenly flipped. No longer a student who played football, he was now a full-time football player completing his med school program during the offseason. It was a switch in schedule, mindset and perspective that he managed to navigate, even when the occasional Chiefs fan would recognize him during rounds in a hospital.

“You go from being a little star in front of 80,000 people and having a whole team of physiotherapists, nutritionists, coaches, trainers, all there to optimize your performance, and then boom: five days later you’re back in Montreal starting a rotation, and you are a medical student at the bottom of the medical hierarchy.”