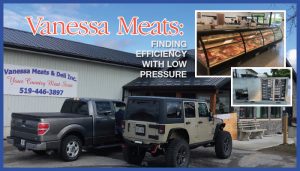 When the new owners of Vanessa Meats were looking to expand, they wanted to increase the company’s refrigeration capacity, and to update the system to meet growing needs. Of course, this was no small bump in size, or minor retrofit; the new system will outpace the capacity of their original system by a factor of about 4.5 to one, despite costing 30 per cent less to run than the original facility size.

Once fully completed, the refrigeration project will give the company the capacity to process up to 15,000 pounds of meat a day, all while consuming less energy than their old system.

And, with early results looking good, system designer Ben Kungl of Oxford Energy Solutions thinks they can bring those operating costs even lower. The next step for this customer is going off grid, he says.

“A lot of this is designed around low inrush, so we don’t use a lot of power to stop and start,” Kungl says. “That makes it easy to adapt to solar as we have already done for other clients. The whole idea is designing a system that will serve their needs for the long-term.”

Growing while reducing the energy footprint

One of the goals, in addition to increasing refrigeration capacity, was to reduce hydro consumption.

“Nobody would believe that you can expand refrigeration space by 4.5 and cut the power usage down by one-third…but we did,” says Kungl.

“There are no thermal expansion valves, no solenoid valves, no pressure operated valves of any type in the system architecture at all,” he says. “Because it’s electronically driven, you don’t need a lot of pressure differential in the system to make it work. That’s why it runs on such a small amount of power.”

And the refrigerant charge has been minimized as well.

“By splitting the facility in half, we were able to limit how much pipe we needed to put through the buildings,” he explains. “It made more sense for system redundancy since the two sides can run together but separately without using miles of pipe.”

When asked if there are any pressure-level concerns in the system, since it uses low-pressure differentials, Kungl explained that there are none with the control architecture being used.

At lower differentials, the system has less stress on it, generates less secondary heat, consumes less wattage, there’s less vibration, and so forth. “With a low-pressure differential,” he adds, “it’s not a linear curve, but a proportional one. When you lower the differential, everything else magnifies in efficiency. Most systems can’t do that because they are designed conventionally and therefore have more limitations as to how low a compression ratio and system design pressure they can achieve.”

Oxford used scroll compressors for this project, because of their operating pressure differential margins.

“By taking full advantage of our ambient conditions, the ability for the system to operate down to and below a 30 psig differential, free subcooling that is, on average, over 20°F, it all sums up to a system that uses incredibly less power to do the same work,” says Kungl. “The savings are astronomical. The system really just exploits the massive energy gain in heavily subcooled liquid and low wattage inputs to move that fluid to the loads.”

Future proofing was a major consideration, so they decided to use a new low-pressure, low-GWP hydrofluoroolefin (HFO) refrigerant, says Kungl.

“It’s completely compliant, and the Oxford Equipment Platform allows the owner to be set up for any future changes to refrigerant trends such as an A2L type.”

It wasn’t about presenting a short-term plan, he adds. “Given that the new owner is young and eager to invest in his own future, why would you design and install a system that already has a potential end date attached to it?”

The design called for a fully automated system that can accommodate any future switchover of refrigerant.

“It made more sense to get into something that was adaptable and fully automated, including trending, graphing and alarming. This design allows you to change the settings on your computer or phone and the system will automatically change its operating characteristics for the refrigerant of choice.”

A major consideration for the system, given its size, was reducing refrigerant charge and system piping, says Kungl.

“Those are the biggest things in refrigeration, or any equipment prone to leaks.”

Any refrigerant in a system that is not doing work is a waste, he says, explaining that this can be seen in “systems that require large winter charges due to condenser flooding, or the use of EPRs on every evaporator which, in turn, increases the overall evaporator charge along with other negative system effects.”

A properly designed system that can match load based on mass flow requires less valving and has less potential to leak. In this installation, the Oxford Platform system can run the facility’s north wing of 14 different circuits with a total system charge of 50 lb.

A different perspective on a system

For Kungl, one of the reasons the system works is because they were able to minimize the number of moving parts in the system.

“The reality is, for a system to work this well, it has to be thought of as one working unit in which every part affects the entire system. The key is keeping things basic and letting the refrigerant do the work without unnecessary restrictions”