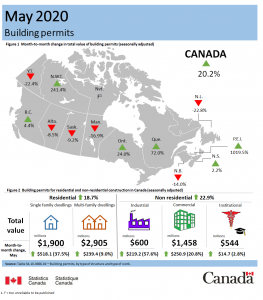 The total value of building permits issued by Canadian municipalities in May bounced back 20.2 per cent, to $7.4 billion, following declines of 13.4 per cent in March and 15.4 per cent in April. This was the largest percentage increase since March 2009, and it coincided with the relaxing of COVID-19 construction restrictions in Ontario, Quebec and Prince Edward Island.

The total value of residential permits was up in six provinces in May, increasing nationally by 18.7 per cent, to $4.8 billion. The largest increase was in Quebec (53.4%). The vast majority of residential gains were attributable to increases in the value of permits for single-family homes, which rose by a record $518 million. Seven provinces reported gains, led by Ontario and Quebec.

The value of permits for multi-family dwellings increased 9 per cent, to $2.9 billion, driven by projects in the Montreal and Vancouver census metropolitan areas (CMAs).

Industrial permits jumped 57.6 per cent, to $600 million, following a substantial decrease in April. This increase was largely driven by a permit for a Molson brewery in the CMA of Montreal.

Institutional permits posted their first gain for 2020, increasing 2.8 per cent, to $544 million. Permits for postsecondary institutions led the increase.