Housing starts trend slides in May 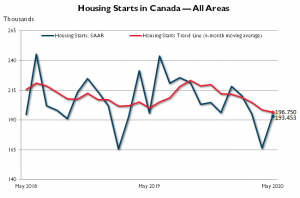 With various restrictions on construction having a negative impact on housing starts, Canada Mortgage and Housing Corporation has reported that the trend in starts went from 198,644 units in April of 2020 to 196,750 in May, a decline that was not unexpected.

Excluding Quebec, where residential construction was halted for almost a month, the national trend for Canada was 151,072 units in May 2020, down from 155,600 units in April. This trend measure is a six-month moving average of the monthly SAAR of housing starts.

CMHC charts outlining preliminary housing start data in centres with populations above 10,000 are almost flat year-over-year, falling from 16,409 in May of 2019 to 16,101 this past May, a drop of two per cent.

“Outside of Quebec, the national trend in housing starts decreased in May,” said Bob Dugan, CMHC’s chief economist. “Higher multi-family starts in Ontario and the Atlantic provinces were offset by declines in British Columbia and the Prairies. We expect national starts to continue to register declines in the near term, reflecting the impact of COVID-19 measures.”