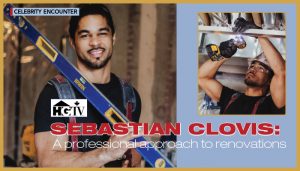 A love and appreciation for the construction trades started early for former Canadian Football League defensive back Sebastian Clovis. Speaking to him in his hometown of Toronto, he fondly remembers building things with his dad’s tools, and wondering about the future buildings that were going up behind the construction hoarding around the city.

“I used to stop on my way home from school to watch the guys on construction sites, watching what they were doing,” he recalls with a smile. Now a professional renovator and one of the hosts of HGTV’s $ave My Reno, Clovis says his ofﬁcial start in the trades happened when he was just 14.

“My parents hired a builder to come and do our kitchen in our house, and they convinced him to let me help him out,” he says. “I built a quick rapport with him, and he hired me on every summer after that.”

Taking a year off before going to Mississippi State University for a football scholarship, he spent a full year learning all about renovations alongside his mentor. “I was well on my way to being a pretty good builder before I even got to university.”

After ﬁnishing his collegiate days with a pair of Vanier Cups with the St. Mary’s Huskies in Halifax, his football path led him to the CFL, where he would earn a Grey Cup victory with the B.C. Lions in 2006. And then renovations came calling his name again.

“We started bringing the furniture in, and we put a bed into the basement, and a chest of drawers, and all of the sudden my feet start getting wet,” he recalls. “So, I run the furniture upstairs and pull the ﬂooring up. Whoever had done the renovation had put vapour barrier across the entire ﬂoor, and seven or eight inches up the wall with acoustic calking to stick it all the way around.”

Unknown to Clovis at the time, water had been seeping in under the vapour barrier, creating a water balloon that burst once the additional weight of furniture was on it.

“As soon as we started putting furniture on there and putting real weight on the ﬂoor, the balloon burst, ﬂooded the whole place,” he says. “Within the ﬁrst week of buying my ﬁrst house in Toronto, I was digging up the entire exterior of the house to put in weeping tile. That was my reintroduction to renovations back in Toronto.”

Becoming part of a legacy
Most of the projects that Clovis gets to work on are in older homes in and around Toronto. For him, there’s a sense of pride that comes from becoming a part of the home’s legacy, and extending the life of the work of the trades pros who came before him. “I’m constantly tying into older building materials, where they are not plumb, they are not level, they are not square, so there is a lot of creative problem solving that comes from that,” says Clovis. “I like going into these homes knowing that they are 100 years old and that there are builders and plumbers, electricians and HVAC technicians that may not even be around anymore, but were a part of that structure… Respecting what they did and ﬁnding a way to tie into what they have already done, there’s something very fulﬁlling there for me, personally.”

CFL Pride
Although it’s a prized possession, you won’t catch Sebastian wearing his Grey Cup ring while at work – there’s no hand jewelry allowed on the jobsite – but it elicits a pride in his achievements and in the game. “To this day, there is so much CFL pride in this country,” he says. “It doesn’t matter what team you played for. It doesn’t matter who you are a fan of, there’s just pride in the league itself.” And the fans come out to every special event or home show where Clovis makes an appearance. “There’s always people there asking about renovations, but there’s always a good portion of people asking who I think is going to win the Grey Cup next year, and what it was like to win,” he says. “The CFL thing was an amazing time of my life, for sure.”

Want to work for Sebastian?
What’s the trick to being a plumber or HVAC ﬁrm that a general contractor will put on speed-dial? Do good work, and clean up after yourself, says Clovis. “It’s the little things. If you were to just sweep up the area, a little touch above and beyond the mess that you’ve made, Seb Clovis cannot call you fast enough,” he says.

“The only way to win at football is if everyone on the team is executing their particular task at the highest production level while being conscious about what each other is doing; helping set each other up for success. That’s the same thing as the renovation site.”

A carpenter and general contractor, he sees his role as having to know what everyone is doing, from his fellow carpenters, to the plumber he’s subbed out to, or the HVAC tech who’s knocking tin for him, but he’s not about to tell them the minute details of what they need to do, or to do their jobs for them.

“I need to know how the entire operation is going to go, but I only need to execute my job at the highest production level. And I need the guys who are in their roles to do the exact same thing,” he says. “It is only when we are all executing our individual roles to that highest level that we are going to be able to win – we are going to be able to make that renovation come in below budget, on time or before the deadline if possible, so that we can earn ourselves a solid recommendation.”

A plumbing trend to watch for
Ask Sebastian what product should be trending right now and he’s quick to shout, “The washlet toilet!”

As more and more consumers target zero-waste lifestyles, he’s been waiting for Canadian consumers to embrace the combination toilet and bidet

“I really believe that is going to become a trend, so I was very happy when one of our homeowners on the show demanded that we put this product in,” he says. “It’s a different setup than regular toilets. It requires plumbing but also requires power to be run to it. But they are popular all over the world, except for here.”

And he adds that it would have been a perfect way to avoid the madness that ensued as people hoarded toilet paper when the COVID-19 pandemic started to emerge. “The people who have washlets installed in their homes don’t have that problem.”

Feeding the flame
“Whether it’s football or building, now that I’m a bit of an elder, whenever I see a young person that just has that look in their eye, that I knew I had at that age, I’m quick to let them ask questions and feed that passion they have in their eyes,” says Clovis. “It reminds me of when I was young. If my mentors didn’t take a chance on me, who knows where I would have ended up.”

Did you know?
In addition to being a licensed contractor, Sebastian has a degree in psychology, which he earned at St. Mary’s University. 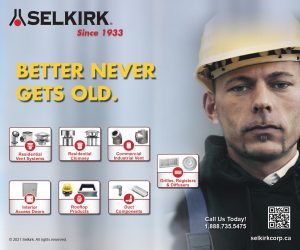