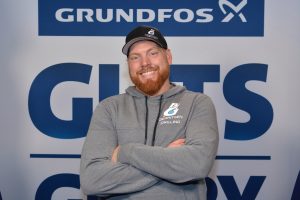 Canada’s own Mike Philips had a trip to Las Vegas to remember – despite narrowly missing out on a $10,000 jackpot – as he claimed the silver medal in the Grundfos 2019 WaterPRO challenge on December 9.

Staged as part of the National Groundwater Association’s Groundwater Week, Philips, of Gerritsen Drilling in Rockyford, Alta., pictured, still pocketed $3,000 for his efforts.

The WaterPRO challenge consisted of 80 qualifying events staged throughout the U.S. and Canada, with the top competitors invited to the finals in Vegas.

Philips completed both timed challenges, but was pipped to the post by Michael Raines of Arkansas. Check out the highlight reel here.

The finalists were honored during a hospitality event that night at the Hard Rock Café in front of more than 800 Grundfos customers and partners.