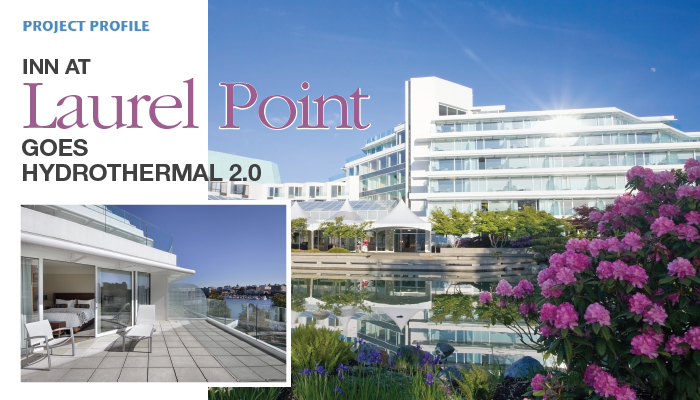 It’s not easy to maintain or upgrade an underground hydrothermal system, but sometimes an opportunity comes up that helps the cause.

Located on the water in B.C., Inn at Laurel Point in Victoria has long been at the forefront of sustainable operations, including its hydrothermal infrastructure that draws ocean water to run part of the property’s cooling systems, says Ian Powell, managing director.

“We’ve always been ahead of the curve,” he says. “Almost 30 years ago we became one of the first in the country to have one.”

The two-pipe system that runs from the harbour to the inn’s Arthur Erickson wing has done its work in supporting the property’s carbon neutral goals. But in the fall of 2018, they had a unique opportunity to take a closer look at what they had, and to improve upon it.

That’s when Transport Canada launched a nearby soil remediation project that would open up the system for all to see.

“Because they also had to dig up the property around the hotel, it was an ideal opportunity to upgrade the system, streamline maintenance and reduce our energy bills even further,” Powell says.

“The technology and understanding of these systems has moved a lot in 30 years. We were able to be far more scientific than last time. At the same time we realized we could put a plan in place for future sustainability.”

“We knew Transport Canada was doing site remediation on property that fronted the inn,” says Sarah Campden, associate with Herold Engineering Limited in Victoria. “Part of that meant removing the hydrothermal pipes running the system. The other was demolishing the existing salt water pond because the remediation would be taking the soil to the bedrock layer.”

Given that everything would be completely exposed, it made sense to not only assess their current needs, but future plans as well.

The original system was comprised of one supply and one return line, with 6” PVC pipes connected to the hotel’s newer wing. The older wing’s cooling system was powered by electricity.

With the inn planning to demolish and rebuild the older Laurel Point wing in the next five years, the opportunity to be ready for that next project presented itself.

“We thought it would be great to have the same hydrothermal capabilities there, knowing each would have its own mechanical room,” Powell explains.

“We knew where the inn was, and we knew where they would have to go,” Campden confirms. “The only question was, ‘How far do we take this?’” After many discussions, they decided to create an additional loop in anticipation of the rebuilding of the second wing.

To build the new system, the PVC pipes between the harbour and the mechanical room were replaced with 6” HDPE pipes: two for the existing system; two additional sea water supply and return lines in the same trench; and two pipes to the older wing for future connectivity.

“When the time comes, it will be easy to connect the pipes with the new mechanical room to create a closed loop,” Campden explains.

An additional 3” line runs back from the building into what will be the new pond, so it can be filled from the same system.

Laying the pipes was not without its challenges, however. Because of the thickness of the foundation walls and the additional lines, they had to reorient where the pipes were coming in. “We had to be very specific in terms of where the coring was placed and the structural framing in order to make sure we could reconnect everything on the inside. It was super-tricky getting that layout finished,” she says.

Another challenge was maneuvering under the inn’s concrete patio in order for the pipes to reach the hotel. In digging up the patio, they found a large retaining wall. The option was to cut, remove and replace it, or dig under it.

“We decided to dig, and sure enough we hit bedrock,” Campden adds. “Overall, getting around all the existing infrastructure of concrete, electrical, irrigation and drainage was a huge challenge. The records at the inn were quite good, but not perfect. We ended up having to move around some stuff we hadn’t anticipated.”

Beyond the piping, the remediation also allowed the team to finish replacing pneumatic valves, an upgrade that they had been working on for the past 10 years, replacing older technology that was showing its age with direct digital control (DDC) system valves.

“With everything being open, we were able to get rid of the remaining pneumatic valves and put everything on DDC,” says Bernie Moore, the inn’s maintenance manager.

“Now I can type parameters into a computer and calibrate the valves any time I need to,” he explains. “The difference in terms of programming, monitoring, and maintenance is like night and day.”

In addition to simplifying the programming, the upgrade is expected to improve efficiency of the hydrothermal system by up to 40 per cent, reports Powell.

“The current hydrothermal system at the Inn at Laurel Point is an open loop configuration that brings water directly from the ocean into the building’s heat exchangers in the basement and returns it back to the ocean,” explains Moore. “The distance to the ocean is about 300 feet, so water further cools as it makes its way back.”

Because the inn is using salt water as a coolant, they installed titanium heat exchangers. The first heat exchanger services the 114 air conditioning units in the rooms of the newer wing. A smaller heat exchanger supplies the chilling for the public areas.

When working with salt water, there are special considerations, Moore says. In addition to titanium, which is more resilient, the impellers for drawing the water are bronze.

“These wear out and have to be replaced every three to four years,” he explains. “But when they were first installed in 1989, they were cast iron. We only got one season out of them.”

The third floor mechanical room houses the fresh water side of the loop for the building. In the winter months there is a three-stage boiler to assist in heating the loop.

Keeping cool in a pandemic

Getting energized about service vans