Stopping refrigerant leaks before they start 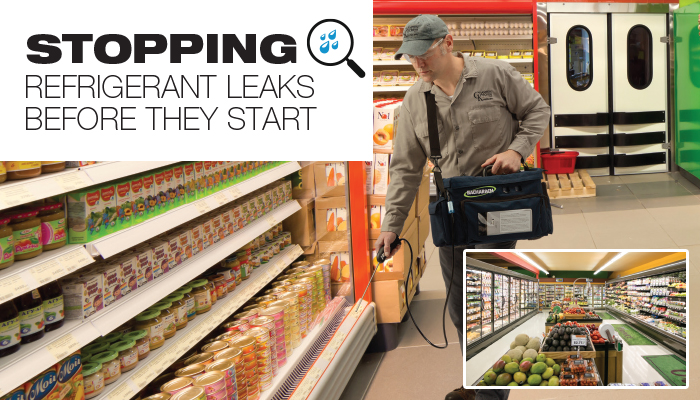 As the cost of refrigerant has increased over the past several years, leak detection, prevention and the reduction of refrigerant emissions have become high priorities for supermarkets, large chilling plants, food processing plants, cold storage facilities and large air conditioning installations.

To help these important clients, refrigerant management through effective leak detection and refrigerant tracking is essential.

The cost of hydrofluorocarbon (HFC) refrigerants has increased between 275 and 700 per cent since 2017, especially in Europe where the regulations are based on the global warming potential (GWP) of these gases.

Older refrigerants with high GWPs are being gradually phased out in favour of newer compounds with a lower GWP. These newer compounds carry a CO2 equivalent much lower than the compounds they replace. As a result, refrigerant prices have moved significantly upward, and this trend is expected to continue worldwide.

As prices continue to increase, the cost of replacing refrigerant ends up outweighing the cost of a technician’s time to locate and repair leaks – not to mention the cost of the lost refrigerant itself, increased utility consumption, any damaged or overworked equipment, and even potential fines from regulators.

This, along with a heightened concern for the environment, has motivated a number of companies to make a significant change in operations strategy. Today, these companies have embarked on refrigerant leak detection programs to find small leaks before they become big and costly problems.

Where do all the leaks typically occur?

Not all refrigerant leaks are as easy to find as those caused by unintentional damage by third parties like cleaning machines, trucks or forklifts that have run into piping. Most leaks will be smaller and harder to spot.

In a commercial refrigeration system, leaks often occur where there are changes in temperature, pressure and vibration. As such, valves, pipe joints and compressors tend to be the primary locations to suspect when a leak has occurred.

Leaks can also be caused by poor installation or maintenances procedures that are aggravated by these changes
in pressure and temperature, or by vibrations. Leaks may also be caused by any device or component that is poorly
restrained or supported within the system.

With the cost of refrigerant, a proactive leak detection program can have a significant impact on the bottom line. For example, a typical grocery store is estimated to have an average refrigerant leak rate of about 25 per cent per year.

A best practices implementation can reduce that rate to seven per cent per year, meaning that the return on investment (ROI) for a more comprehensive leak monitoring system can now be realized in a matter of months rather than years.

With various types of monitors on the market today, selecting the right monitor for the installation is a critical first step. Options include infrared, semiconductor, electrochemical and catalytic bead systems.

Infrared monitors can detect refrigerant gas leaks at 1 ppm, and can be recalibrated to detect new gases as old ones are phased out and new refrigerants are introduced in the market. They may use a laser or imaging sensors to detect gases, and are effective at longer distances than other detection systems.

Semiconductor systems detect gases via a chemical reaction at the sensor, so they require the gas to come in direct contact with the sensor. They are often used for things like carbon monoxide detectors, and may be affected by things like water vapour, humidity and temperature fluctuations.

Electrochemical and catalytic bead systems rely on oxidation of a substance to determine a concentration of a gas, using voltage and current flow or heat of combustion to detect the presence of gas.

For permanent monitoring, aspirated multi-point leak detection systems can continuously monitor a number of different locations across the refrigeration system. For larger installations, monitors can be networked together. Also available are smaller monitors for less complex installations.

As refrigerant prices continue to move upward and new environmental and safety regulations are introduced, it can be a prudent step by your customers to invest in a proactive refrigerant management program that can lower costs, reduce utility consumption and help protect the environment.

Managing the risk with leak detection

Canada, like many jurisdictions, has rules and regulations addressing the proper handling of refrigerants. The use of a permanent leak detection system can help ensure compliance with the latest regulations.

Refrigerant leaks are not only costly, they can also be hazardous under certain conditions. ASHRAE Section 8.11.2.1. deals with safety of personnel who may be inadvertently exposed to harmful gases from a refrigerant leak.

While many applications have some form of leak detection, it may be prudent to question whether that detection system is adequate.

A proactive leak management program should include an application-appropriate type of leak detection technology, coupled with a comprehensive remote monitoring and refrigerant tracking system in order to detect and notify you of leaks as early as possible. These notifications can be weighted by its status: Alert, Alarm, or Critical, for example, and can also be sent out to multiple parties who may be affected by any release of refrigerant.

Technology is not only good for sending out alerts and warnings. Some refrigerant management software can track events to determine patterns in the system, which can help assess which asset is most likely to be the cause of the leak.

The availability of this data can have a strong impact on the overall energy efficiency and effectiveness of the refrigeration system, as well as system maintenance. A leak index can act as an early warning for any potential increased usage of refrigerant, while the leak rate helps define the long-term performance of the system.

The goal is to get and keep a low leak rate and to respond to leak events detected by the monitor quickly and effectively.

The majority of refrigerant losses in commercial refrigeration and HVAC systems are due to a number of small leaks that often exist for a very long time. This makes them more difficult to detect.

In a study of several million leak events, it was discovered that leakage from mechanical joints tends to be progressive, starting small and working their way up to full-blown events.

Leakage of refrigerant is often caused by a breakdown or failure of the equipment due to aging, which results in failure of mechanical joints and seals. In some cases, the joints and seals that are susceptible to becoming leakage points are aggravated by changes in temperature, pressure and vibration, causing the leaks to come and go intermittently. These types of leaks are very difficult and time-consuming to find.