Next Supply teams up to tackle cancer 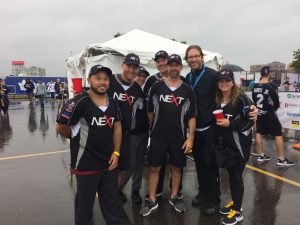 Next Plumbing and Hydronics Supply helped pull 300 members of the industry together to take part in the annual Scotiabank Road Hockey to Conquer Cancer event – raising more than $345,000 in the process.

Overall, the latest staging of the event attracted more than 1,900 participants across 167 teams, which faced off at Woodbine Racetrack in Toronto and raised a record-breaking $3.1 million. Across the event’s nine-year run, a total of $23 million has been raised for world-leading research at Princess Margaret Cancer Centre, one of the top five cancer research centres in the world.

With each team playing four games throughout the course of the day, the top fundraising teams had an extra incentive for their efforts – the opportunity to draft and play with a celebrity.

“Hockey has always played an important role in my life,” says former Canadian NHL player Shayne Corson, who played with the Next Plumbing team. “One of the reasons I love coming to this event is that it allows me to play a game I love to raise funds in honour of my dad, who I lost to cancer. Not to mention, it’s just a really fun day!”

“We believe in being integral to our customers, co-workers and community,” says Michael Storfer, Next CEO, “and events like this are a tremendous occasion to engage employees, customers and vendors to make a difference for a cause that touches so many of us.”

Next Supply has already committed to 30 teams next year.

Gilbert to head Bradford White efforts in the east