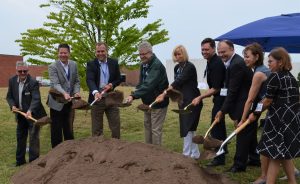 Looking to dramatically expand its share of the pumps market, Grundfos Canada held a ground-breaking ceremony for the expansion of its head office and warehouse facility in Oakville, Ont., on July 11.

“We want to double our business,” said Grundfos Canada president Simon Feddema, pictured far left, as he welcomed guests to the event. “We have the ambition, but we need the space to do so.

“The objective is not to just sell pumps,” he added, explaining that the company is very focused on the efficient use of energy and resources. “We want to change the way that water is pumped around buildings.”

Grundfos has had a footprint in Canada since 1981, and established Grundfos Canada in 1992, which opened its Oakville facility in 1997.

The Canadian firm has been averaging an annual growth rate of almost 10 per cent since 2002 and, with this expansion, plans to double the size of its current facility, bringing the office, product assembly and warehousing space to 48,000 square feet by July of next year.