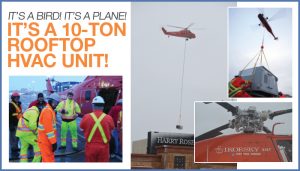 Seeing a load of mechanical equipment ﬂying high in the sky is old hat for Ian Bergeron of Sprint Mechanical, but even with hundreds of helicopter HVAC lifts under his belt, he still gives each event his full care and attention, and that was very evident during a recent equipment swap at Yorkdale Shopping Centre in Toronto.

The lift, which included the placement of a new 10-ton, 1,450-pound rooftop unit, the removal of a pair of older rooftop units, and the movement of four pipe bundles, was one of several that Sprint does each year at that particular mall.

“We are at Yorkdale about once every six weeks,” explains Bergeron, who actually did his ﬁrst helicopter-enabled project at Yorkdale back in 1990. He became a pilot about six years later. “Yorkdale has done so many lifts that they have the process down to a science.”

He estimates that the mall has around 900 rooftop units, along with other mechanical systems, like its cooling towers and exhaust fans.

“The HVAC equipment we were lifting was to serve a new tenant, so it was going on a new curb in a new location,” says Bergeron. “We removed two old units. One was going to scrap and the other was going to storage as the old tenants moved out and the units were not required.”

Starting on-site a little before 6 a.m., the crew ensures that the parking lot has been properly cleared and cordoned off for the arrival of the helicopter around 7 a.m., at which point a safety brieﬁng is held, personnel conﬁrm their assigned tasks, safety gear is checked and the lifts can begin.

In a standard two-hour window, Bergeron estimates that they can do 40 to 45 lifts, although on this particular Sunday, only six were required. “We start at sunrise and need to be cleaned up and gone by 8:30 a.m. to allow the store owners to do their prep work to open at 11.”

The multi-storey roof at Yorkdale ranges from 66-feet in height in some areas to 30-feet in others. This elevation difference, and the amount of reach that would be necessary for a crane, makes it a good candidate for the use of a helicopter.

“Typically, helicopters become feasible with buildings whose roof access requires 350 feet or more of reach,” says Bergeron. “When you use a crane, it can take a few days to set up and take down, meaning you are in ﬁre routes and are taking up hundreds of prime parking spots that generate $15,000 per day per spot.”

Being somewhat of a novel solution for equipment placement, some building owners may express some initial hesitancy when the concept of a helicopter is suggested, but having a successful track record and being able to present a well-documented plan helps.

“Initially, like with any new process or idea, you get resistance, not just from the building owners but from the general contractor or even the city, however after the ﬁrst job, they see how safe, easy and efﬁciently we did the work, and they realize the beneﬁts of the helicopter,” he says.

NO SPACE, NO PROBLEM

Although this particular lift was made from the mall’s parking lot, Bergeron explained that they don’t need a landing spot in the immediate vicinity of the pickup or delivery zones.

“We can pick up off a ﬂatbed truck at an intersection, if needed, and can do a lift from as far away as a few kilometres using vacant parking lots or closed roads to stage from,” he says.

“We don’t have to land if the space is too small. We can hover, drop the long line, and lift the units.”

Sprint and its partner on these projects, Zimmer Air Services, use a Sikorsky S58T, the same type of aircraft that was used to pluck NASA astronaut Alan Shepard out of the sea on May 5, 1961, after he became the ﬁrst American to travel into space.

Considered a medium lifter, it has a cargo lifting capacity of 4,500 pounds, a range of 470 km and will burn around 120 gallons of fuel in an hour.

When asked what gives him the biggest thrill when it comes to each planned lift, Bergeron is practical as ever. “It’s getting the job done as planned, in the time allowed for, with no issues or concerns,” he says.

While weather is always a consideration, things like having snow on the ground are more of an issue for the landing crew on the roof and in the loading area, since the snow may mask tripping hazards, so work areas need to be cleared and roof crews need to be extra vigilant.

For the helicopter ﬂight crew, the main concerns with weather come from lightning, freezing rain and gusting winds. When not gusting, consistent wind coming from the direction the helicopter is moving can actually add to the aircraft’s lifting ability, which is a nice positive. 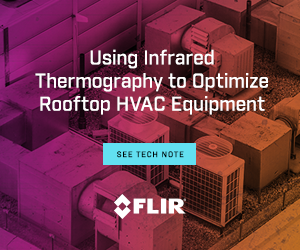