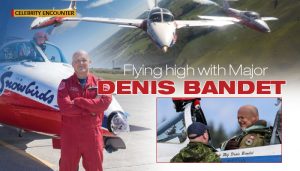 There was a time when the closest Maj. Denis Bandet thought he’d ever get to touching the sky was from the top of a hydro pole.

His dad worked for SaskPower before setting up his own contracting business, and young Denis was being groomed to take over the family ﬁrm.

“I worked backhoes and bobcats, and climbed poles and all sorts of stuff in my younger years,” recalls Bandet, now “The Boss” of the Snowbirds aerobatics team.

“I remember always being at the shop; changing oil, ﬁxing machines, that sort of stuff. I think it’s in the blood. It’s still in my blood.”

Being the eldest son in the family business, he says that it looked like he was destined to take over the reins some day, but a day out with friends threw all those plans up in the air.

“They tell you that air shows have a big impact on people, and it certainly did on me,” he says. “I went to my ﬁrst air show when I was 21 and it opened my eyes – I was blown away by what I was watching and it set the ball rolling.”

Not long after the show, he was off to a local ﬂying club in Regina to do an exposure ﬂight. “I went up with an instructor in a little Cessna 150. The minute we took off airborne, I was hooked. Absolutely hooked.”

PLOTTING HIS OWN COURSE

Having a dream of being a jet pilot is all well and good, but when your current employer is your father, telling your boss you want to quit and go do something else is not the most comfortable conversation you will ever have.

“I was working with my dad in the family business. I liked working outside. But I can say now that my heart was never in it. I just wanted something else. I felt there was something else I wanted to do that was more engaging, a little more adventurous in that sense.

“Because I thought I would be taking over the family business I wasn’t as engaged in my studies as I should have been,” Bandet says. “But you know what, you can change your own path, so I went back to school and upgraded a bunch of skills and I started my private pilot’s licence.”

Leaving Regina to continue his aviation training at Mount Royal College in Calgary, however, brought the reality of his career choice into focus.

ANSWERING THE CALL OF DUTY

After getting his wings, Maj. Bandet underwent fighter training in CF-18 Hornets, racking up flight hours and honing the skills he would later use to thrill crowds of thousands as a Snowbird.

He says, “It was a hard road. I had a lot of nights where I didn’t know if I was going to go through the pilot training; wondering whether I was going to get washed out or not, but you’ve just got to be willing to do the work. Maybe that’s something that intimidates people.”

He persevered, however, earning selection to the Snowbirds in 2011 and beginning a two-year stint as Snowbird 6 – the outside right-wing position. Following a deployment to the Middle East as part of Operation Impact, he made his way back to the Snowbirds’ base in Moose Jaw, Sask., in 2017 to take his seat in Snowbird 1 as “The Boss.”

MAKING IT AS THE BOSS

Whether you’re the owner of a mechanical company with three employees or “The Boss” to a group of highly trained military jet pilots, your people look to you for leadership.

Of course, the military has its own hierarchy, but simply issuing orders is not enough to get the best out of people.

“When I went through my pilot training, I was really impressed with the amount of responsibility they gave you at a very low experience level,” says Bandet. “I had about 400 hours of flying experience and I’m flying an F-18 by myself!”

That level of trust is something that he looks to emulate in his leadership style.

“I look to be a leader who puts a lot of trust into their people,” he says. “On the ﬁghter pilot side of things, your leader should be somebody who is willing to jump in the jet and lead the whole formation across, either the combat line or just in training.

”Listening, says Bandet, is also a key part of the leadership role. “When we go into our brieﬁng room we have this little model that says you need to check your egos and attitudes at the door, and that includes myself.

“It would be nice just to be able to give people a pat on the back and say good job, but really we make our money in how we tear our show apart; ﬁnding what needs to be better.

“Anything we do can be done better, and we are always open to that.”

INSPIRING OTHERS TO SUCCEED

Being such visible representatives of Canada comes with equal parts privilege and responsibility. Each Snowbird knows that whenever they don the famous red jumpsuit, they must not only make all the right moves in the air, but also on the ground.

“We have the mindset that someone is always watching,” says Maj. Bandet of his team. “You have to be a role model.

“The main motivation for us is not recruitment, it’s to inspire people to achieve something they never thought would be achievable.

“If that leads to the military, great. But if the next person wants to be the best backhoe operator in the world, then we hope by watching our show that they’ve been inspired. Apply it to whatever they’re doing, and go be the best at it.” 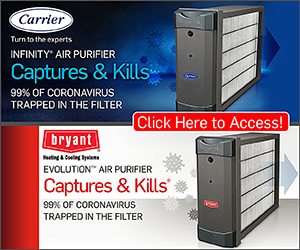