Plumbing – With lead-free legislation, codes, standards and regulations in all stages of progress here in Canada, the only thing that can be said with any certainty and consistency for all regions of the nation when it comes to plumbing products designed for use in potable water systems is that, though similar, the rules regarding lead-free valves and fittings in Canada will not be the same as the rules in the U.S.

In fact, the regulations on lead for fixtures and fittings designed to convey potable water may not be consistent from one province or regulatory jurisdiction to another. And it is this confusion that has had suppliers juggling to keep up with an evolving regulatory landscape.

“Unlike in the U.S., we don’t have a similar ‘blanket’ regulatory action in Canada,” says Moe Fanous of Watts Water Technologies (Canada). “We may be looking at two different valid scenarios. Municipalities can simply reference the new NPC changes in their local codes, specs and manuals, or municipalities can write their own local bylaws to enforce the new standards.”

“Given the potentially high profile of something like lead-free, it’s probably a reasonable guess that most of the provinces will have adopted it by the end of 2014,” says Thomas Husebye, vice-president of marketing with Dahl Brothers (Canada). There will likely be some exceptions, however, such as in provinces that don’t have a history of adopting interim code changes.

Are imports on their way?
The use of a January 1, 2014 effective date in Ontario does sidestep the possibility of U.S. firms exporting non-lead-free products into that province’s potable marketplace – a possibility that still exists in many jurisdictions.

Moe Fanous of Watts says that proper planning can help prevent a wave of non-conforming product making its way to the Canadian marketplace from the U.S.

“If they gradually phase out the leaded items and slowly introduce the lead-free to the market, this process can go almost seamless with no unwanted leftover products.” He reports that this is what Watts Water Technologies has been doing in the U.S. market since September 2012.

“Generally speaking, yes, we should see some products being shipped to Canada for this reason. However, I personally do not think it is going to be as bad as it sounds since these products can still be used and installed in the U.S. after January 4 – in non-potable applications.”

Of course, as the Canadian Commission on Building and Fire Codes points out, “It will be up to the provincial/territorial regulatory authorities to consider when and how to adopt such changes into law.”

Many of the provinces that have adopted the 2010 NPC will set in place an effective date of six months following the publishing of the interim changes by the CCBFC. Others may take longer or shorter periods to adopt the changes, if they choose to at all.

Eric Gagnier, a technical advisor on plumbing with the Regie du batiment du Quebec reports that the amendments to NPC 2010 will be adopted in Quebec six months after they have been published nationally, a step that is expected to happen by next month. This will create a consistent level of regulation and implementation timeframe in the province, without a need for additional provincial bylaws or legislation, he says.

“Now that Ontario has ratified lead-free into its building codes, I can see others using Ontario’s laws as a prototype to follow,” says Andy Fretz, Canadian national sales manager of commercial product with Apollo Valves.

That legislation sets a consistent bar for plumbers in that province to work with, but some manufacturers and wholesalers have expressed concerns about the short implementation timeframe within which product inventories will have to be adjusted.

“Due to the speed at which Canadian authorities are trying to implement these changes, there are bound to be hiccups along the way,” says Dobbin Sales’ Jason Boyd. “In the U.S., the plumbing channel has had a few years to prepare.”

Is it lead-free?
One of the challenges that will face plumbing inspectors as lead-free becomes the new reality for potable water systems will be knowing a product’s lead content. And with the revisions to the plumbing code being adopted at a staggered pace, in some jurisdictions the ability will exist to use non-lead-free product, so long as they were manufactured prior to December 31 of this year.

“What is far more important than knowing the technical definition is that plumbers and inspectors need to be able to easily identify the difference between regular brass and lead-free brass products,” says Husebye. “If any products enter the market without a marking then this could pose a major problem for inspectors once the lead-free standard starts to become adopted into local codes.”

Knowing that there could be uncertainty, and that some types of valves and fittings will have application in potable and non-potable systems, many manufacturers are putting in voluntary markings programs.

“Although there hasn’t been a clear cut definition of how to identify lead-free product over non-lead-free product, many manufacturers have taken it upon themselves to appease the concerns from inspectors, contractors and wholesalers alike,” says Andy Fretz of Apollo Valves.

“Most manufacturers will have some type of indicator on the packaging, or in the part number or stamped on the body of the product that will indicate that it is lead-free,” adds Jason Boyd of Dobbin Sales. “It will be important for contractors to be aware of what these markings and indicators are.”

And if it is difficult to tell lead from lead-free, it may be next to impossible to sort out which products were produced prior to the cut-off date outlined in the revised CSA B125 standards.

“As such, inspectors will likely not allow non-lead-free product in a build once the enforcement date is reached, since it will be next to impossible to tell when the product was produced,” says Eric Gagnier of the Regie du batiment du Quebec.

In Canada, the definition of lead-free is that the weighted average lead content of the brass material is less than 0.25% on wetted surface areas.

HVAC – Getting to know static pressure

Off the cuff with Colin Mochrie: The importance of giving back 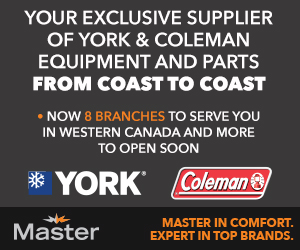